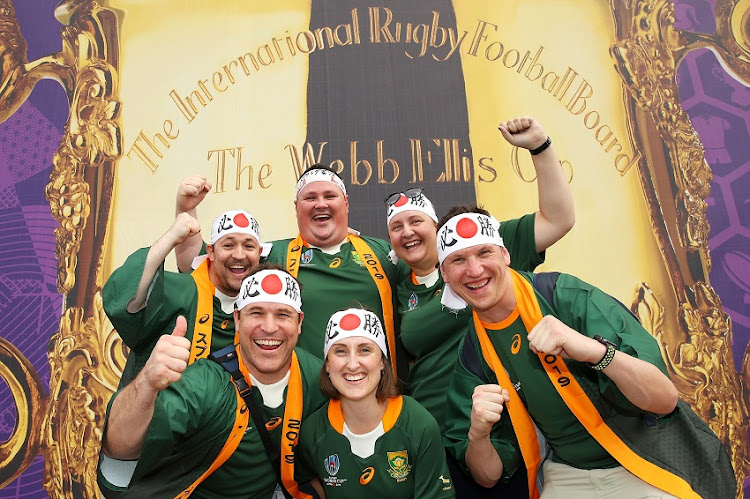 South Africa fans pose in front of a Webb Ellis Cup picture before the Rugby World Cup 2019 Group B game between South Africa and Namibia at City of Toyota Stadium on September 28, 2019 in Toyota, Aichi, Japan.
Image: Mark Kolbe/Getty Images

World Rugby has had much to answer for in the pool stages of the Rugby World Cup (RWC) and their biggest suits‚ as well of those in the organising committee‚ fronted the media in a show of force on Tuesday.

They have been lambasted for their contingency plans‚ or lack thereof‚ before and in the aftermath of super typhoon Hagibis‚ but they pushed back keen to place the commercial success of this event into the public realm.

This was their fact sheet:

• More than 1.8 million tickets sold across all 48 matches

• Monumental effort to get matches on at the weekend

“World Rugby and the Japan Rugby 2019 organising committee have praised the people of Japan‚ the teams and fans after a pulsating pool stage that showcased the best of Japan and the best of rugby on and off the field‚ while delivering record broadcast‚ social and digital media outcomes‚” they stated in a media release.

Some of those boxes were indeed effortlessly ticked‚ largely though due to the host nation’s boundless generosity and stoicism when disaster struck over the weekend.

World Rugby may be of the school ‘the show must go on’ but for the people of Japan that is more than a catch phrase. It is their everyday reality.

“An emotional final weekend of pool play that characterised the unbreakable spirit of a remarkable tournament‚ saw a monumental effort by organisers‚ cities and the people of Japan to make matches happen in the wake of typhoon Hagibis‚” the game’s governing body continued in their statement.

“With the devastation across areas of Japan‚ Canada and Namibia made headlines around the world for assisting with the clean-up operation in Kamaishi‚ while the Brave Blossoms’ emotional victory over Scotland was a gift to the people of Japan‚ generating global headlines.

“More than 1.8 million tickets for Asia’s first Rugby World Cup have been sold across all 48 matches through official channels with an average of 99 per cent of tickets sold across all venues.

"Reflecting how the excitement of the tournament has captured the wider Japanese public‚ a record 864 000 fans have attended packed Fanzones‚ many local people seeing rugby for the first time.”

Those are impressive numbers and sure there could have been better contingencies for the typhoon‚ but this RWC when we reflect upon it after its November 2 climax‚ it will be one remembered for the triumph of the human spirit.