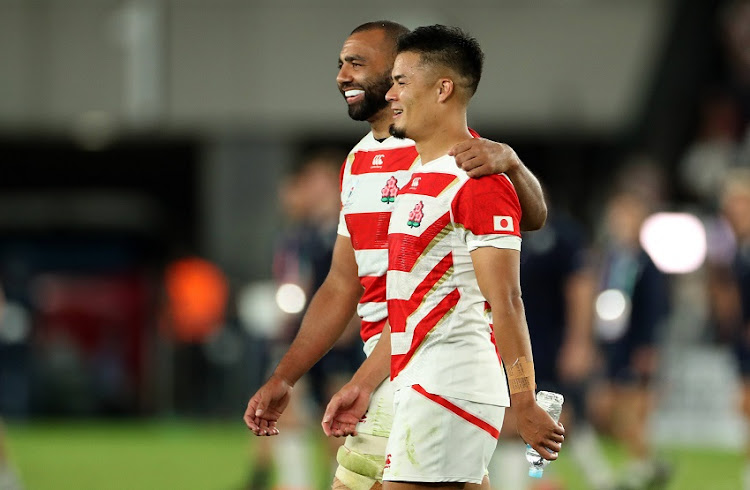 Shortly after beating Scotland‚ Japan captain Michael Leitch claimed not to know who their opponents will be in the quarter-finals of the Rugby World Cup (RWC).

“I don't know who we have got next but we start next week and go from there.

"We are not coming out next week to have a good game and lose‚ but to win‚” he said after Japan cemented the first-ever appearance of an Asian side in the RWC quarterfinal by beating Scotland 28-21 in Yokohama on Sunday.

In the euphoria‚ however‚ coach Jamie Joseph paused and pointed to events far bigger and infinitely more significant.

“I think it is important to acknowledge what went on (on Saturday) with regards to the typhoon. We woke up in the morning and nine people had been killed and 12 missing and are still missing.

“We talked about that as a team.

"Sometimes those sorts of things can be overwhelming‚ but I think it came out in the mix (on Sunday).

"While we are celebrating‚ a lot of people are suffering‚” said Joseph about the super typhoon that has already claimed 35 lives.

It was as if Joseph’s side drew inspiration from the country in its hour of need and those on the terraces played their vocal part in help lifting the team after they went 7-0 behind early on.

“We call it noise. Walking into a hotel with people clapping‚ come out of the station and 50 people parting the way like royalty. It's a bit different‚ especially for me.

“If we are honest with what we need to do‚ we need to limit it as much as possible. We understand we are representing the nation and the players are buying into it‚” said Joseph.

It helped Japan play an attacking game that was at times mesmerising.

“I think the word attack is often reflected in the way you get the ball back‚” said Joseph.

“We are an attacking team as well. There are two sides. Scotland really hit us there.

“Persistence and confidence and trust the plan is what saw us through. In the last two or three minutes it was a test match we didn't want to lose.”

Joseph then talked about something that perhaps characterises the nation – the ability to learn in adversity.

“A lot of things have happened in the last three years and in Super Rugby the guys have had exposure‚" he said.

"It is a chance to rub shoulders and play against the same players in the tournament.

"It is hard to explain‚ losing every week you are still getting experience.”