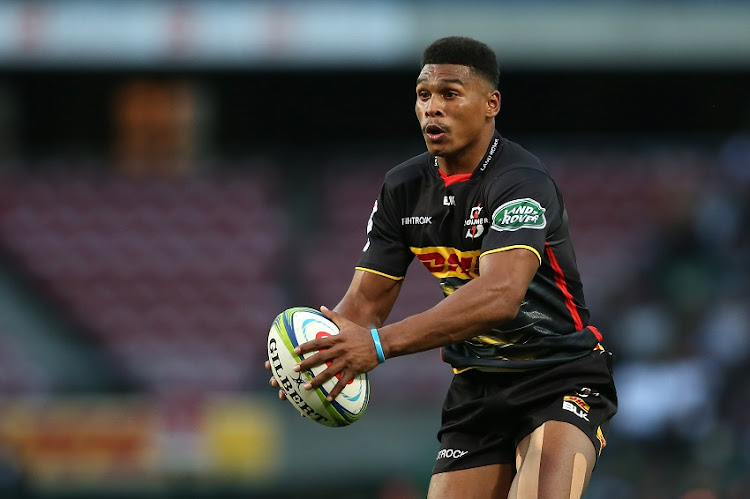 Damian Willemse of the Stormers on the attack during the Super Rugby match between DHL Stormers and Crusaders at DHL Newlands Stadium on May 18, 2019 in Cape Town, South Africa.
Image: Shaun Roy/Gallo Images

Springbok fullback Damian Willemse will make a late push for World Cup selection when he plays for Western Province against Griquas in Kimberley in a crunch Currie Cup match on Friday.

WP coach John Dobson said that Willemse would see some game time following a lengthy knee injury lay-off‚ which puts him one week ahead of his original schedule.

Willemse has nearly run out of time to stake a claim in the final 31-man World Cup squad to be named later this month.

Even if he does prove his fitness in Kimberley on Friday‚ the success of the current crop of Test players‚ who just won the Rugby Championship‚ leaves Willemse in a precarious position.

He started at fullback against England last year‚ and was in good form in the first half of Super Rugby earlier this year. But the injury couldn’t have come at a worse time and at best‚ he can hope for a place among the standby players to Rassie Erasmus’ RWC squad.

“I expect Damian Willemse to be back this weekend along with (flank) Jaco Coetzee‚ wing SP Marais and (prop) Ali Vermaak‚” Dobson said.

“Selecting them will be difficult because the guys starting have done well. SP’s big boot could be a factor in Kimberley though.”

After beating the Pumas 45-14 last Friday‚ WP are back in semi-final contention and the clash against the high-riding Griquas will have deep ramifications for the overall log.

Griquas currently top the standings on 15 points but are only three points clear of WP in fourth place with Golden Lions and Free State Cheetahs occupying second and third on 15 and 12 points respectively.

The Cheetahs are away to the Pumas this weekend while the Lions host the fifth-placed Sharks on Sunday.

“It’s going to be really tough in Kimberley and we hear the match will be sold out‚ which is great. There has been a lot of interest in this game for weeks‚” Dobson said.

Kimberley is a difficult venue for most visitors and WP lost there in 2017.

“We’ve had some bad experiences in Kimberley and it’s hard to put a finger on why‚” WP captain Chris van Zyl said.

“Maybe it’s a combination of the conditions and the way their belief soars at home. It’s on another level.

“They also believe we really don’t like going there‚ which increases their own belief.

“This year they are playing a good brand of rugby and they have got a lot of things right. So it’s going to be an exciting match.

“We had a good win against the Pumas but we still didn’t get everything right. That will put us in a good mental space to keep working hard this week.”