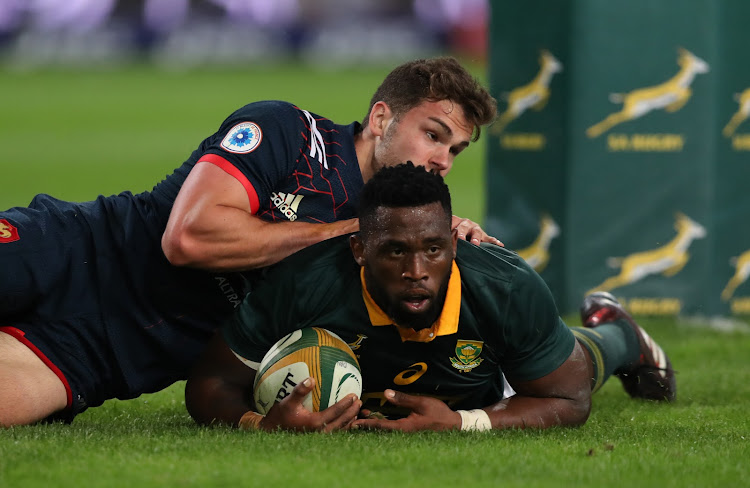 Stormers captain Siya Kolisi is out of the remainder of Super Rugby with a knee injury and is in a race against time to be fit for the Rugby Championships.

The Bok skipper injured his knee in the act of scoring a try against the Highlanders last weekend.

Kolisi‚ sitting on the side of Stormers training at Newlands and wearing a knee brace‚ told TimesLIVE that he had taken a conservative approach to treatment.

The exact nature of the injury was not made clear.

“I’m going to be in the brace for six weeks‚ which is the alternative to surgery‚” Kolisi said.

“I’m hoping to be ready to play in time for the Rugby Championships.”

It’s a risky strategy if the injury does not heal as well or as fast as hoped. But he has had three opinions on the course of action.

Kolisi is set to become the first black player to lead the Springboks at a World Cup‚ when the tournament takes place in Japan later this year.

It would be massive blow for him personally‚ for the Boks and the country‚ if he were unable participate in the global showpiece.

Star flank and another Bok kingpin‚ Pieter-Steph du Toit‚ is also out for three weeks with a shoulder injury picked up in the Highlanders game.

Although his injury is not as serious as Kolisi’s‚ it is a blow for the Stormers as they fight for a place in the Super Rugby play-offs.

The Stormers also lost flank Kobus van Dyk for 12 weeks‚ leaving them thin in the back row for Saturday’s trip to Ellis Park to play the Lions.

Ernst van Rhyn returns from injury to be among the reserves and there is a potential debut for flank Marno Redelinghuys from the bench.

“The back row injuries are not ideal‚ so we have had to mix up the loose trio‚” coach Robbie Fleck said. “I’m grateful Ernst van Rhyn is back from injury to cover there.

“Siya’s campaign is over but hopefully he’ll be able to play in six weeks.

"We want to keep building on our performances every week and this is another great opportunity for us to show what we are capable of.

"The focus has been to assemble a playing group that is primed and ready both physically and mentally for what we will face on Saturday. There is no doubting the motivation within the group‚" he said.