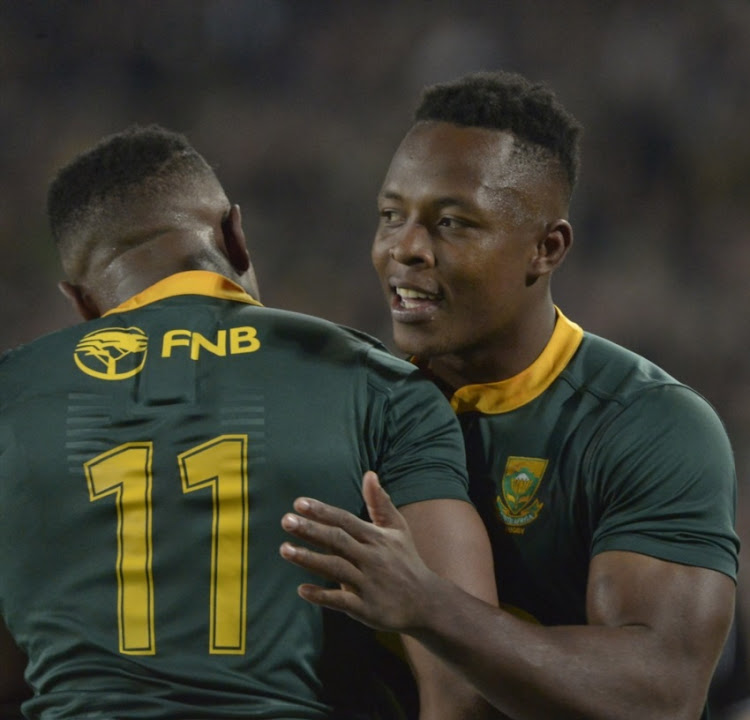 Dyantyi‚ who would have seen several visiting teams suffer at his home ground in Super Rugby‚ acknowledged how the thin Highveld air and fervent support from the stands gradually took its toll.

“Especially after the 30th minute looking at the English guys who were really tired. I think to our favour.

"We needed to put the pressure on and we did‚” Dyantyi smiled.

Naturally‚ the support from the stands was boomingly boisterous and it helped that Dyantyi recognised some familiar faces.

He said it took him back to his days at university.

“When I started playing Koshuis rugby they were the guys I used to play touch rugby with on Sundays.

"That is where I started playing rugby. Those are the guys I went to school with. They got me in to rugby. It was a great touch from those guys‚” said Dyantyi.

“We knew we would win‚” says Springbok wing Sbu Nkosi

It might be the exuberance of youth‚ or supreme confidence in both his and the Springbok team’s abilities‚ but wing Sbu Nkosi always believed the ...
Sport
4 years ago

In the build up to the Test England coach Eddie Jones suggested the Boks tend to grow an arm and a leg playing at Ellis Park and after the game he stopped short of saying his team would have won had the match been played anywhere else.

“That is a good question. I’ll sleep on that one‚” said Jones.

The Boks performed a near miracle overturning a 24-3 deficit but Dyantyi acknowledged they cannot afford to leave the starting blocks so poorly in the second Test.

“In a Test it is a bit different because you look to get the ascendancy from the start‚" he said.

"That is something we need to work on for next week.

"There were a lot of mistakes and I have to go back and work on those.”

Although he scored on debut the Lions’ wing was modest about the feat.

“I won’t take the credit. That was off the play book. Credit must go to the coaching staff for identifying the space out wide‚” he said.

Dyantyi‚ who’s game is based on doing everything at breakneck speed and conjuring the outrageous‚ was equally measured when asked about his approach to the game.

“I like everything under control but in the spur of the moment something like that can happen‚” he said.

He explained that coach Rassie Erasmus‚ however‚ encouraged him to tap into the magic that got him selected.

“He gave me the confidence by saying ‘Aphiwe’ just go and play your normal game‚” he said about the pep talk he had with Erasmus.

“’We chose you because of how you play and who you are’. I will carry on playing the way I normally play.”

It was also confirmed that prop Trevor Nyakane has been withdrawn from the Springbok squad because of injury.

He has trouble with a rib injury and did not play a part in Saturday’s victory over the English at Ellis Park.

The Springboks travel to Bloemfontein on Sunday afternoon where they will resume their preparations for the second international against England.