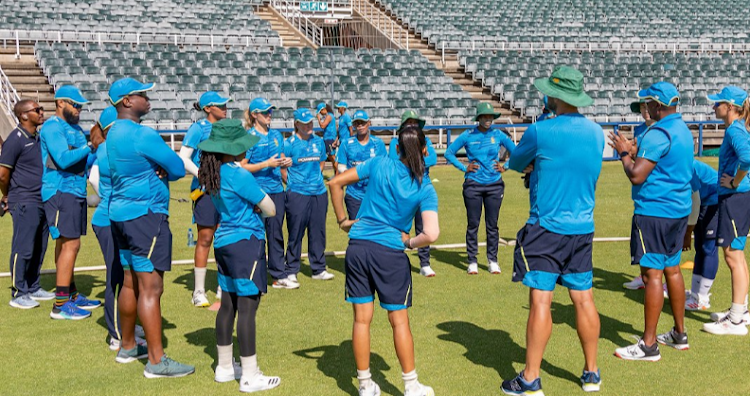 Momentum Proteas players and coaching staff in a team discussion at the Wanderers ahead of a training session.
Image: @OfficialCSA/Twitter

Momentum Proteas rising star batter Laura Wolvaardt can’t wait to strut out to the middle and wield the willow in the four-match ODI series against the West Indies which starts in Johannesburg on Friday.

While the SA senior women’s national cricket team last played as a unit in a five-match ODI series against the same West Indies in the Caribbean in September last year, Wolvaardt had valuable time in the middle having featured regularly for the Adelaide Strikers in the Women’s Big Bash League in November.

The only breather she had was for the short festive period but that was ages ago, according to the Milnerton-born Western Province opening batter.

“I’m really looking forward to get out there in the middle and I’ll be looking to stay focused and bat long innings,” said the youngster who turns 23 on April 26.

The first ODI starts at the Wanderers and all four matches will be played in a biosecure environment (BSE) at the Johannesburg venue.

“I have spent a lot of time in the nets recently but I think the important thing for now will be game time and just being in different game situations.

“I think because the 50-over game is a lot longer it is about finding that balance of patience while also keeping the scoreboard ticking. There is only so much you can do in the nets.

“Training has been really good so far. It has been a good 14 days or so of training. It was good to see the girls again coming off a long break of the Christmas period.

“It’s nice just to get back in the swing of things, play practice games and have some time in the middle.

“I think it has been vital for the preparations leading to this series, which is obviously vital for the World Cup as well,” said Wolvaardt.

The hard-hitting right-hander was one of the shining lights on the international stage in 2021 with 440 runs in 12 games at an average of 40, including five half-centuries.

Her Twenty20 international record is just as impressive and her signature is one of the most sought after in the shortest format.

She was not shy to say which format of the game is her favourite.

“I’m happy with where my game is. It has been a lot of Twenty20 cricket for me last year playing in the Big Bash and the Hundred and so it is really nice for me to shift my focus back to the 50-over game.

“I think that is what I really enjoy doing and what I am good at I guess.

“Things are coming right for me and hopefully in this series against the West Indies I will get some runs behind my name ahead of the World Cup.

“I think it is always good to go to the World Cup with some wins under your belt, some confidence and momentum.”

The four-match series are the final preparations for both teams before they depart for the World Cup, to be hosted by New Zealand from March 4 to April 3.

“I just want to get some runs behind my name and spend as much time as possible out in the middle, which we have not done too much of recently.

“As a team we will just be looking to get our combinations right and win as many games as possible,” said Wolvaardt.