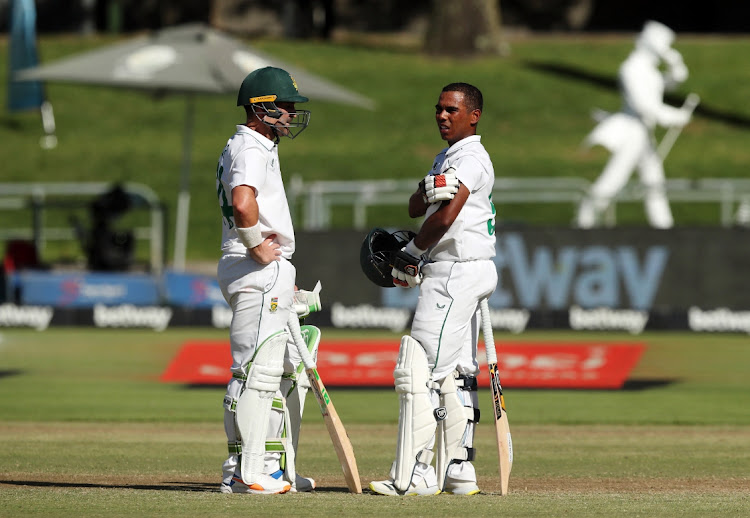 Dean Elgar and Keegan Petersen provided a solid base for SA's fourth-innings chase against India at Newlands but, crucially, Elgar got out on the last ball of the day.
Image: REUTERS/Sumaya Hisham

As the shadows lengthened across Newlands the Test headed inexorably to a dramatic conclusion.

With series honours at stake, SA on Thursday were set a victory target of 212 and they went about that task relatively untroubled until they were dealt a cruel blow just before the close when captain Dean Elgar was caught down the leg side for 30.

It means SA will resume their second innings on Friday 101/2, another 111 short of their target.

It has proved a gripping Test match as fortunes have been as capricious as the breeze sweeping in from the southeast.

SA appeared to be make headway until Elgar fell just before the close. Earlier they also appeared to be making a bright start before Aiden Markram again got out to a shot that had him hanging his head. He drove extravagantly at a Mohammed Shami delivery and was caught in the slip cordon by KL Rahul. It was a well-held catch as Markram pretty much threw the kitchen sink at the ball.

The net result of course is he had to depart the scene with no further way of affecting proceedings and he will have much to lament in the aftermath of this series.

Elgar and Keegan Petersen set about their task with verve and vigour and brought up their 50 partnership in 80 minutes. They were in no way becalmed by the gravity of the situation or, indeed, by what India threw at them.

India captain Virat Kohli may not have a lot of runs to play with but his attacking field placings meant points of release were on offer for the South African batters.

Elgar, who was always going to be a vital cog in the chase, profited from edging the ball to vacant third man a couple of times.

He was all stout, inelegant defiance but fourth-innings chases aren't defined by artistic merit.

His departure is a huge blow.

If Elgar was the ballast after the ripples caused by Markram going overboard early, then Petersen at the other end is operating the thrust levellers.

He reverse swept Ravichandran Ashwin in his sixth over for four with a shot that left little doubt about his exaggerated level of confidence.

If there was any doubt, he gave himself room to the leg side and cut the next delivery in front of square for four.

Ashwin was removed from the attack.

Earlier, India appeared to be batting themselves into a position of strength before Lungi Ngidi altered the course of the contest.

Rishabh Pant played what could possibly be the series-defining innings, at a time SA looked to wrest control of the contest.

The wicketkeeper who goes about his business with dash and dare stood defiantly by notching up just the second ton of the series.

India were bowled out for 198 in their second innings, leaving SA a victory target of 212. It was the first time in Test history that a team lost all 20 wickets to catches, which perhaps says something about the SA fielding.

They may well have been in a spot of bother had Pant not taken matters into his own hands in an exhibition of wildly eccentric stroke play. He swung so lustily at one delivery he lost his bat and it travelled skyward to leg slip. Pant ended 100 not out from 139 deliveries but could have had more had he not refused to take singles that may have exposed the tail.

After their early success the SA attack could not maintain its intensity, allowing India to build a significant lead, but the dismissal of Kohli in the middle session presented the hosts a window of opportunity.

India lost five wickets in the middle session but at the other end Pant advanced their cause no end.

While Kagiso Rabada and Marco Jansen applied the early squeeze on the third day, they weren't back up until Ngidi gave the hosts hope in that session.