Rishabh Pant played what could be the series-defining innings of India's three-Test tour at Newlands on Thursday.

India's wicketkeeper fashioned a century on a wicket hardly tailored for lavish stroke play to leave his side in a handy, near impregnable position at tea against SA.

They may well have been in a spot of bother had Pant not taken matters into his own hands in an exhibition of wildly eccentric stroke play. He swung so lustily at one delivery he lost the bat from his grasp and it travelled skyward to leg slip.

Pant ended on 100 not out from 139 deliveries, but could have had more had he not refused to take singles that may expose the tail.

After their early success the SA attack could not maintain their intensity, allowing India to build a significant lead, but the dismissal of Virat Kohli in the middle session presented the hosts with a chance. 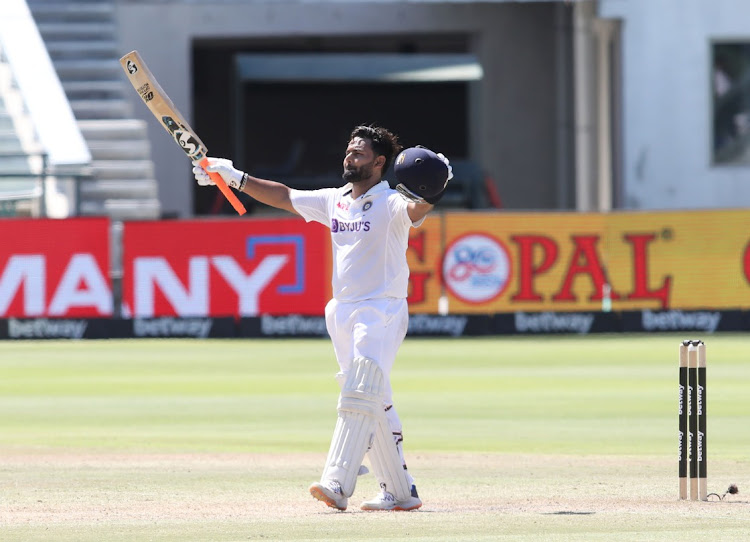 India lost five wickets in the middle session, but at the other end Pant advanced their cause no end.

While Kagiso Rabada and Marco Jansen applied the early squeeze on the third day they weren't backed up until Lungi Ngidi gave the hosts hope in that session.

To suggest the SA attack has operated as a unit in this Test would be a stretch.

Duanne Olivier has lacked the zip and penetration that made him such a handful the last time he played here in 2019. He effectively bowled just two lengths back then, but he has returned from England a fuller, more rounded operator after his Kolpak obligations drew to a close.

On Thursday SA could have done with the meaner, menacing Olivier who in 2019 was more likely to grab the game by the scruff of the neck.

Keshav Maharaj, who it was hoped would have a bigger impact in this Test, has fallen short. He principally operated from the Kelvin End and it did not take long before Pant took a shining to what was on offer.

India's keeper clobbered Maharaj for two sixes in the left armer's seventh over and he was withdrawn from the attack. The effortless sweep with which he cleared the fence was one of breathtaking simplicity.

Jasprit Bumrah took 5-42 as India bowled SA out for 210 and then drove home their advantage with the bat as the ended day two of the decisive third ...
Sport
3 days ago

The straight six that required no aid from the southeaster soon after took the ball on a far more adventurous path. SA's fielders took a while to locate it.

One of the unintended consequences of not having paying spectators in the ground is the inevitable delay for play to resume when the ball clears the ropes.

India were shifting through the gears and were advancing on a position near impregnable.

Just as that gloomy reality started to sink in Ngidi stepped forward. Captain Kohli, who had been even more watchful than he was in the first innings, also wanted to up the ante, but he paid the price. He drove ambitiously at a Ngidi delivery and was smartly held by a leaping Aiden Markram at second slip.

Kohli's 29 came off 143 deliveries but the destructive Pant remained.

Ravichandran Ashwin also displayed an attacking streak, but his challenge was snuffed out early when he became Ngidi's second victim.

India reached tea on the first day of the deciding Test against SA having suffered two more setbacks, but it could have been a lot worse.
Sport
5 days ago

Keegan Petersen called on his teammates to make a fast start on day three of the deciding Test against India and that is what they did as the Proteas ...
Sport
3 days ago
Next Article