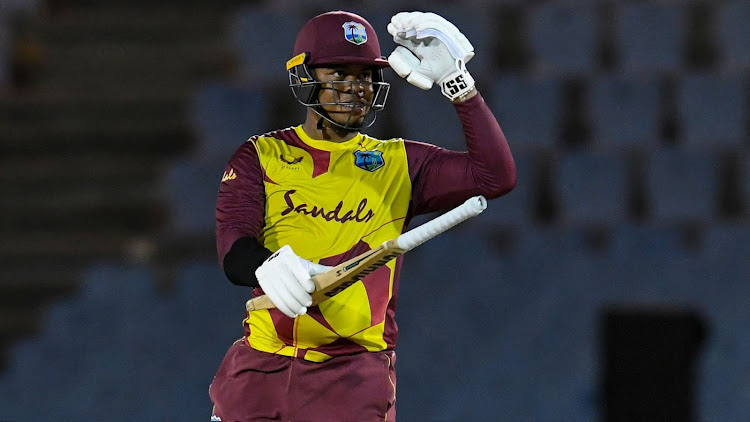 Shimron Hetmyer has said hs 61 off 36 balls is one of his best Twenty20 innings.
Image: @windiescricket/Twitter

Shimron Hetmyer's 61 off 36 balls and Dwayne Bravo's unbeaten 47 helped the West Indies seal a comprehensive 56-run victory over Australia in the second Twenty20 international in St Lucia on Saturday, to take a 2-0 lead in the five-match series.

Australia's Mitchell Marsh struck his second half-century in as many matches with a steady 54, but a batting collapse similar to the one they suffered in the opening game meant the visitors were bowled out for 140 in 19.2 overs chasing 197 for a win.

It marked the first time since 2010 that the team lost all 10 wickets in consecutive T20 matches.

"We just said we were going to do the same things we did last night, even a little better. It was fantastic to see how Hetmyer responded," said West Indies' stand-in skipper Nicholas Pooran.

Asked to bat first by Australia skipper Aaron Finch, the hosts got off to a solid start with 46 runs in the Powerplay overs as opening batsman Lendl Simmons blasted three sixes in his knock of 30 before man-of-the-match Hetmyer took over.

The left-hander was the aggressor with four sixes and two boundaries as he stitched together a 103-run partnership with Bravo, who had three hits over the fence as the Australian bowlers struggled to contain the flow of runs.

"I think it was one of my best T20 innings. I think I paced it quite well. It really worked out well for me with the guys backing me to be the guy to just take it as deep as possible," Hetmyer said.

Andre Russell added 24 off eight balls after Hetmyer was run out, as the West Indies added 123 runs in last 10 overs to reach 196-4 on a good batting wicket.

Australia lost both openers inside four overs and barring Marsh, failed to rise to the occasion, as West Indies leg-spinner Hayden Walsh claimed 3-29 from his four overs while paceman Sheldon Cottrell returned figures of 2-22.

"When both your openers get out cheaply, it puts pressure on a reasonably inexperienced middle order. The 100-plus partnership, that's the difference in the game."

The third T20 will be held at the same venue on Monday.