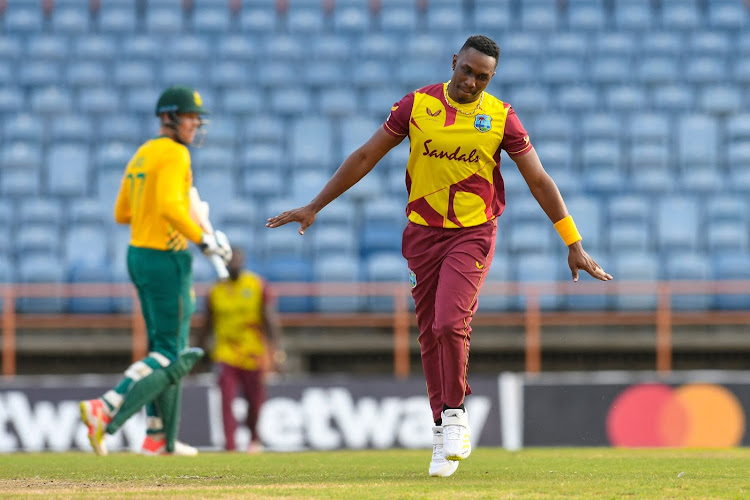 Dwayne Bravo celebrates a wicket in Grenada, where he used all his guile and tricks for career-best T20 figures of 4-19.
Image: Windies Cricket/Twitter

Captain Kieron Pollard impressed with bat and ball as West Indies defeated SA by 21 runs to level the five-match Twenty20 series at 2-2 on Thursday.

After being sent in to bat at the National Cricket Stadium in Grenada, the home side posted 167 for six in their 20 overs, before restricting SA to 146 for nine in reply.

Pollard produced a late onslaught to smash 51 from 25 balls, including five sixes, to boost the West Indies’ total after they had again been slowed by SA’s twin spin threat of left-armers Tabraiz Shamsi (2-13 in four overs) and George Linde (2-16 in four overs).

Opener Lendl Simmons had given the home side a fast start by belting 47 runs from 34 balls but as has been the case in the previous three games, they were stifled by the spin pair, who have taken a combined 11 wickets at a miserly economy rate of 5.55 per over in the series.

That was until Pollard and Fabian Allen, who scored 19, attacked the seamers in the death overs and put on 66 in 27 balls in an unbeaten seventh wicket partnership.

Quinton de Kock scored 60 from 43 balls in the tourists’ reply, but had little support as the West Indies’ change of pace from their seamers was excellent.

Pollard (1-24) was forced to bowl four overs after spinner Allen injured his shoulder trying to stop a boundary, and set the tone for the rest of the attack, with Dwayne Bravo (4-19) using all his guile and tricks for career-best figures.

The series decider will be played at the same venue on Saturday.

The Proteas will send a big statement ahead of the World Cup later this year if they win the fourth Twenty20 clash against the West Indies on ...
Sport
1 year ago
Next Article