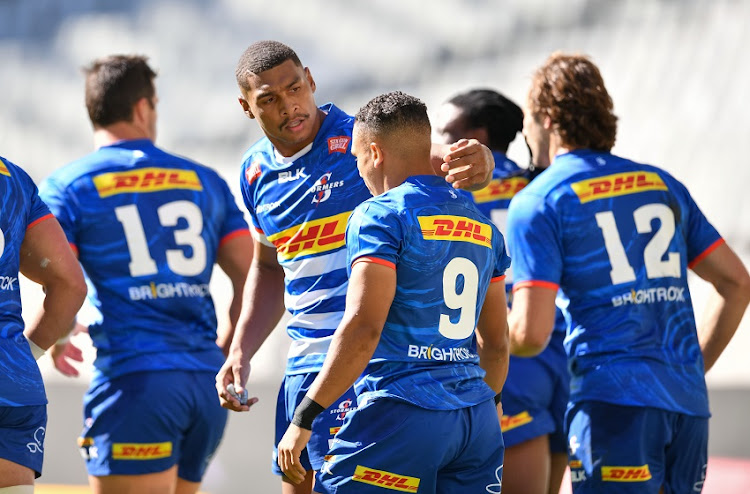 Damian Willemse of the Stormers congratulates Herschel Jantjies of the Stormers on a scoring a try during the PRO14 Rainbow Cup SA match between DHL Stormers and Cell C Sharks at Cape Town Stadium on May 01, 2021 in Cape Town, South Africa.
Image: Thinus Maritz/Gallo Images

Western Province have gone on the offensive to try and discredit a report that claims Damian Willemse is a R5m burden on their salary bill.

The union through head coach John Dobson and board chairman Ebrahim Rasool also declared their displeasure at reportage around their star player‚ what he earns and what he is worth.

A report emerged on the weekend suggesting Willemse‚ who had been courted by the Bulls (with a hefty R3.8m carrot no less)‚ opted to stay in the Cape after he was offered a package in excess of R5m a year.

Dobson added: “We want to protect the sanctity of what the players earn.”

To be fair‚ reporting on players' salaries or price tags have for some time been fair game in sports that have a longer relationship with big money and professionalism‚ than rugby.

Moreover‚ salaries are rather topical given the impact the pandemic has had on the sport‚ especially against the backdrop of the industry savings plan in which SA Rugby shaved more than R1 billion off their budget. Some of those cutbacks include salaries.

Dobson has a problem with both principle and detail.

“His cost to WP is considerably less than that. His total including the Players of National Interest (Poni) contribution which SA Rugby is at pains to protect‚ doesn't total anything that was published‚” said Dobson.

The story‚ which was penned by a thorough and experienced journalist with a vast contact list‚ also became the basis for an opinion piece by another scribe which also raised the ire of Dobson and Rasool.

Some may argue that you have semantics at play as there clearly is disparity between what WP pays Willemse and what he ends up earning through SA Rugby and bonuses.

“Whatever Damian earns he deserves. He is a guy we really‚ really wanted to keep here‚” insists Dobson.

He argued that their recruitment policy‚ in no doubt difficult times‚ is measured and well thought out. “We can’t be throwing the money (the speculated amount) at all these players‚” said the coach.

Dobson said WP did well to retain talent while managing to stay 15‚3 percent under their salary cap. “I am very happy with the squad we have retained and in no way or at any stage has it been through reckless use of the chequebook.”