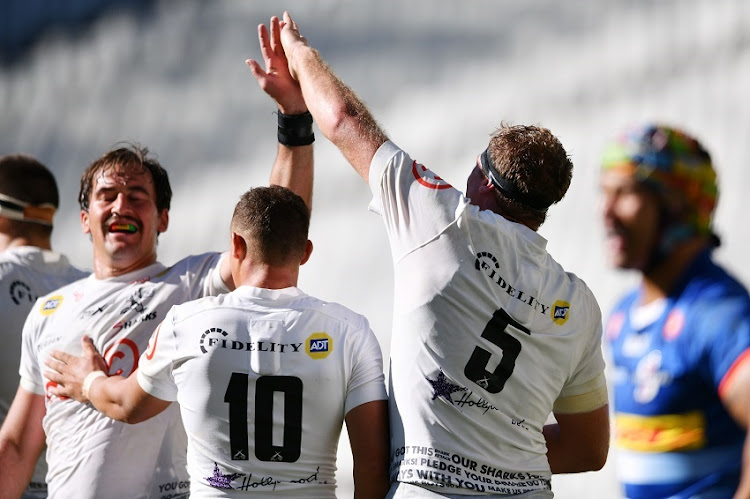 Rarely has the launch of a competition taken such a back seat to events down the pipeline, and equally lesser spotted is the way in which ill-discipline helped bring about such a complete fluctuation in fortunes between half time and final whistle.

In the end the Sharks held on for a 33-30 victory against the Stormers in an opening Rainbow Cup SA match punctuated by referee Jaco Peyper’s whistle.

They showed remarkable resolve after earlier looking down and out in a match at Cape Town Stadium shaped by what came from Peyper’s pocket.

The Sharks scored 26 unanswered points as the Stormers struggled to come to terms with the permanent banishment of, first, wing Seabelo Senatla, and then No 8 Willie Engelbrecht, who copped two yellows, resulting in red.

“It turned the game,” sighed Stormers coach John Dobson. “It was remarkable. It cost us massively.

Both teams pushed physical frontiers in a clash of cracking intensity but so eager were they to go at each other’s throats, errors, even elementary ones, were inevitable.

The Springbok brains trust though cannot fault the effort and endeavour that was on display here.

What will be a slight concern was the players’ lack of application when it came to staying within the laws, particularly around foul play.

The match lost its shape as a result as the Stormers undid all of the sterling work. They thoroughly dominated the opening exchanges with their Springbok front row and a redoubtable line-out applying the squeeze on the visitors.

The Stormers were more assertive in the collisions and bossed the breakdown as a result.

A recurring theme in the first half was the Sharks taking the ball to ground and Peyper, moments later, raising his right arm in favour of the Stormers.

Siya Kolisi, in his first clash against his former team, rarely caught the eye early on but he and his teammates grew an arm and a leg as the match wore on.

Things were going so swimmingly for the Sharks’ opponents they had to be reduced in personnel for the match to enter the realm of contest.

The irony is the Sharks were level on the try count by the time halftime whistle sounded but so errant were their ways that the Stormers still looked the far superior side.

That changed after the break as the Sharks smelled blood and showed their potency from broken field. In the end it were they who made the Stormers pay.