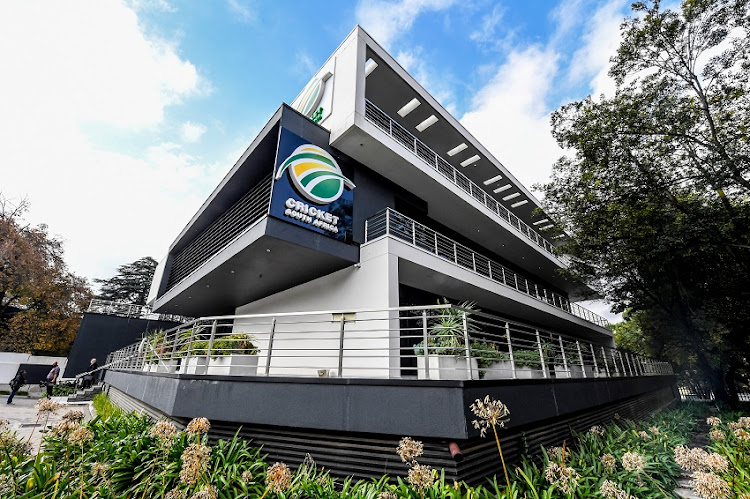 Cricket South Africa"™s Office, in which the Minister of Sport, Nathi Mthethwa along with CSA leaders held a press conference to announce that the MOI that had caused the fratricidal over board architecture was adopted, paving the way forward for cricket"™s future on April 30, 2021 in Johannesburg, South Africa.
Image: Sydney Seshibedi/Gallo Images

Cricket South Africa (CSA) officials are working closely with the Indian Premier League (IPL) franchises in a bid to ensure the safe and expedited return of the South African players and support staff who were part of the event.

India is in the midst of a health crisis as Covid-19 infections and deaths continue to rise with alarming speed‚ and Quinton de Kock‚ Kagiso Rabada‚ Anrich Nortje‚ Lungi Ngidi and David Miller were among the South Africans working at the famous tournament.

CSA said on Tuesday they are in constant contact with the different franchises and agree with the postponement of the tournament due to health and safety reasons. The postponement has left players and support staff from several country with a headache and they attempt to return home.

“Cricket South Africa (CSA) has noted the postponement of the 2021 season of Indian Premier League (IPL) due to Covid-19 safety reasons‚” said CSA in a statement.

“CSA supports the decision to put the health and safety interests of all involved in the tournament first and foremost and has made contact with all of the relevant franchises to ensure the expedited travel of all South African players and support staff back to our shores.

“Those travelling back to South Africa will undergo home quarantine in line with the current World Health Organization recommendations. CSA and the South African Cricketers Association (SACA) are in contact with all players and are assured of their safety and comfort in their respective locations.

“CSA wishes to extend its well wishes and support to the Board of Control for Cricket in India (BCCI) and the people of India and thank the BCCI for keeping our players safe during this challenging time.”

“The BCCI does not want to compromise on the safety of the players‚ support staff and the other participants involved in organising the IPL. This decision was taken keeping the safety‚ health and wellbeing of all the stakeholders in mind‚" said the IPL GC and BCCI.

“These are difficult times‚ especially in India and while we have tried to bring in some positivity and cheer‚ however‚ it is imperative that the tournament is now suspended and everyone goes back to their families and loved ones in these trying times.

“The BCCI will do everything in its powers to arrange for the secure and safe passage of all the participants in IPL 2021. The BCCI would like to thank all the healthcare workers‚ state associations‚ players‚ support staff‚ franchises‚ sponsors‚ partners and all the service providers who have tried their best to organise IPL 2021 even in these extremely difficult times.”

The event was supposed to end on May 30 with the final in Ahmedabad and it is not clear whether it will resume or not.

The IPL’s suspension has reportedly also casts doubt on this year’s Twenty20 World Cup which is scheduled to take place in India in October-November.