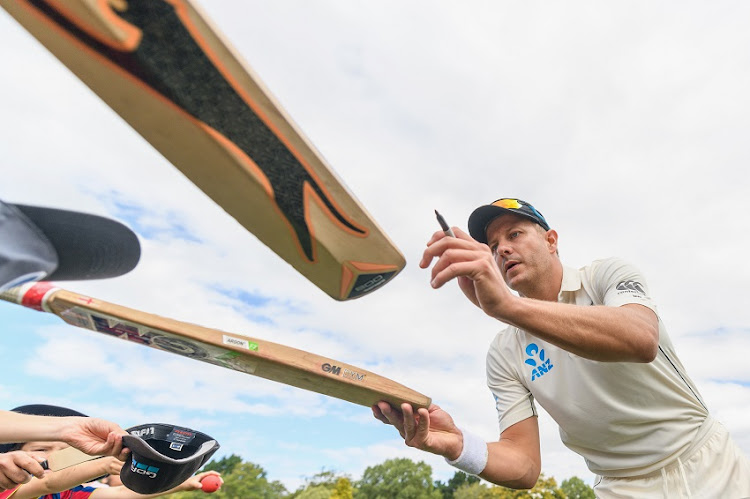 Neil Wagner of New Zealand signs autographs during day one of the Second Test match between New Zealand and India at Hagley Oval on February 29, 2020 in Christchurch, New Zealand.
Image: Kai Schwoerer/Getty Images

Indian bowlers face a dilemma over whether to apply saliva to shine the ball against South Africa while England’s players have been asked not to sign autographs or take selfies with fans in Sri Lanka following the coronavirus outbreak.

Globally, more than 119,000 people have been infected by the coronavirus and over 4,000 have died.

While lots of international sporting events have been affected, South Africa play the first of their three one-day internationals in the northern city of Dharamsala on Thursday.

Asked if the traditional way of shining the ball using saliva would be too much of a risk, India quick Bhuvneshwar Kumar told reporters: “We have thought about this thing but right now I can’t say what we’ll do.

“But then if you don’t use saliva, how do you shine the ball? And if you don’t shine it, you’re bound to bleed runs and people will criticise your performance,” he said.

“But, yes, it’s a valid point. We have a team meeting later today and we’ll follow whatever instruction we get and whichever is the best option.” In Sri Lanka, England’s players were asked on Wednesday not to sign autographs or take selfies with fans as Joe Root’s men prepare for the two-test series starting at Galle on March 19.

“England players and staff have been asked to avoid any unnecessary public engagements, and temporarily avoid casual supporter interaction such as selfies or autographs,” the England and Wales Cricket Board (ECB) said.

“Whilst we acknowledge that this will be disappointing for some supporters, we stress that this a measure to protect the ongoing wellbeing of the England Test squad and is a decision which has not been taken lightly,” it added.

The tourists had already decided to replace handshakes with fist bumps to avoid contamination.