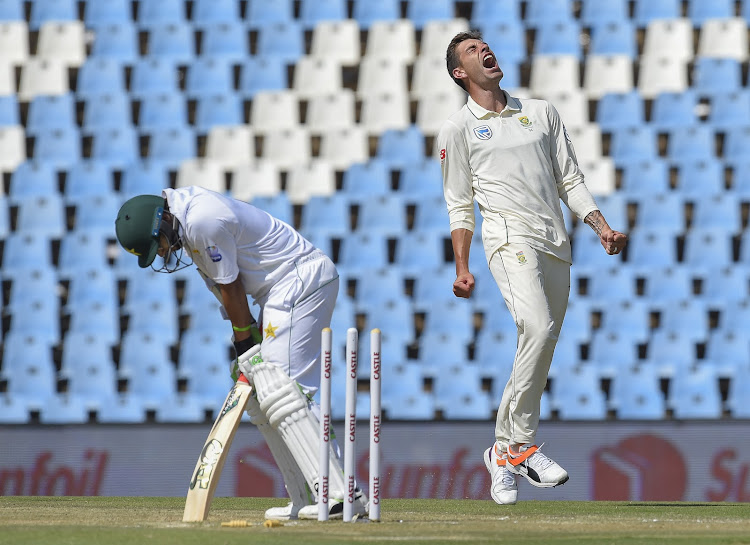 Proteas' fast bowler Duanne Olivier celebrates after taking the wicket of opener Imam-ul-Haq for 57 runs during day 2 of the Castle Lager Boxing Day Test match between SA and Pakistan at SuperSport Park in Centurion on December 27 2018.
Image: Chrsitiaan Kotze/BackpagePix

South Africa’s fast bowler Duanne Olivier continued to stamp his authority in Centurion with a further five wickets on day two of the Boxing Day Test to take his tally for the match to a highly commendable eleven.

Olivier now has a ten-wicket haul to his name at this level of the game and his exploits have left South Africa needing only 149 runs to win the first Test.

The Proteas bowled out Pakistan for a cheap 190 after 56 overs with a second innings lead of 148 runs.

Olivier‚ who tormented the Pakistani batsmen with his pace and bounce‚ returned with impressive figures of 6/37 on the opening day but he further accelerated on Thursday to end on 5/59 as he became the third South African to take ten wickets in a Test match against Pakistan.

The match will resume on Friday with Dean Elgar and Aiden Markram faced with the task of giving South Africa a good start as they chase the 149 target they have been set by a Pakistan side that was not impressive with the bat.

Kagiso Rabada also impressed with the ball with a late surge in the third session by claiming the wickets of Babar Azam (6)‚ Pakistani skipper Sarfraz Ahmed (0)‚ who is yet to score a run in this series after two golden ducks‚ and Muhammad Amir (12).

With the wicket of Amir‚ Rabada achieved a significant personal milestone of having taken an impressive 52 Test wickets after ten matches‚ which makes him the leading wicket-taker in the world this year.

Before Rabada entered the fray‚ it was all about Olivier who rattled Pakistan’s second innings with the wickets of Fakhar Zaman (12)‚ Imam-ul-Haq (57)‚ Azhar Ali (0) and those of Yasir Shah (0) and Shaheen Afridi (4) late in the session to round off what has been a splendid bowling performance.

The unfortunate thing about Olivier is that he may not be in the team in the second Test in Cape Town in the new year at Newlands if the Proteas think tank decides to revert back to proven campaigner Vernon Philander if he proves his fitness.

The other important contributor to the Proteas’ cause was Dale Steyn with the wickets of Asad Shafiq (6) and danger man Shan Masood ‚ who top scored for Pakistan with a defiant knock of 65‚ to register his 50th wicket against Pakistan.

Besides half centuries by Imam-ul-Haq and Masood‚ Pakistan’s batting card made for sorry reading as none of the other players failed to go past 12 runs and there were three golden ducks as they were bowled out for under 200 for the second time.

All smiles & happiness in the Grand stands as fans continue to enjoy this BLOCKBUSTER of a test match #SAvPAK ?#ProteaFire ?? pic.twitter.com/pG2hsl2kFk