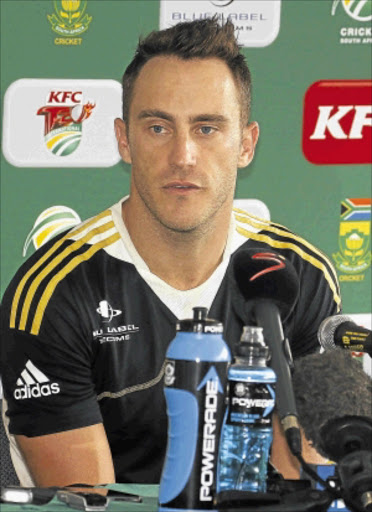 The Proteas are still sweating over the fitness of captain Faf du Plessis on the eve of their Boxing Day day-night test against Zimbabwe starting at St George’s Park in Port Elizabeth on Tuesday.

Du Plessis has not played cricket since injuring his back in the second ODI against Bangladesh in October.

He was ordered to rest and at the same time had an operation on a troublesome shoulder.

Speaking at his captain’s pre-match press conference‚ Du Plessis said the signs has been promising during the past fortnight before he received another slight setback.

“My progress was really good over the last two weeks. I picked up a virus last week which has slowed me down a little bit. Right now‚ where we stand‚ I’m trying to get to practice today and see how it feels‚” the 33-year-old said.

The Proteas management are likely to give their skipper enough time until Tuesday before the toss until making a call on his availability.

“Last week I was 80-20 for playing‚ I’m probably now 60-40. Yesterday there was still a bit of discomfort but we’re hoping today is better.”

If Du Plessis does not play‚ it will make the selectors’ job much easier.

As matters stand now‚ they need to find a spot in the batting order for AB de Villiers‚ who is expected to make a return to test cricket this week after an absence of nearly two years.

Du Plessis admitted the choice would be made much easier if he does not play.

“Yes‚ a little bit. But I suppose you have to pick your new captain‚ which is something different but it gives someone else an opportunity to play‚ which was the headache in the first place‚” said Du Plessis who has
played 45 test matches since making his debut five years ago.

If needed‚ it appears likely that Dean Elgar will be given the captaincy with the opening batsman having performed the role against England at Lord’s earlier this year when Du Plessis was on maternity leave.

Du Plessis admitted there had been thoughts of going with an all-out seam attack when considering the test would be a day shorter and that part of the match would be played at night when conditions would be more “spicy”.

“It’s something we’ve spoken about but you’ve got to remind yourself that it is a game that is played 70% in the day‚” said Du Plessis.

“The pink ball historically does a bit when its new‚ then it gets a bit softer and it gets easier to bat even if there is a bit of grass like there is there.

“It does get easier for batting and then at night‚ the ball tends to swing and nip around a bit more.

The majority of the game is still played in decent batting conditions‚ especially because it’s in PE where your spinner does play a role. Our thinking is that we still need a spinner.”

That suggests left-arm spinner Keshav Maharaj will be in the line-up.

It remains to be seen if South Africa go with what is perceived to be their best available pace attack in Dale Steyn‚ Morne Morkel‚ Kagiso Rabada and Vernon Philander.

Three of them are coming back from injury and have not had much game time but Du Plessis is thrilled to have them all in contention again.

Play gets under way at 1.30pm on Tuesday.

The top five coaches in SA cricket‚ and why

They’re the people who will be blamed for what goes wrong even though they’re on the other side of the boundary and ignored when it goes right.
Sport
3 years ago

Cricket South Africa (CSA) have not decided to mount an independent investigation into the T20 Global League (T20GL) saga.
Sport
3 years ago

AB de Villiers's motivation for returning to test cricket is to help Proteas regain the number one position.
Sport
3 years ago

Proteas coach Ottis Gibson is relishing the opportunity to pick his aces from a full deck ahead of the historic day-night pink ball cricket test ...
Sport
3 years ago
Next Article