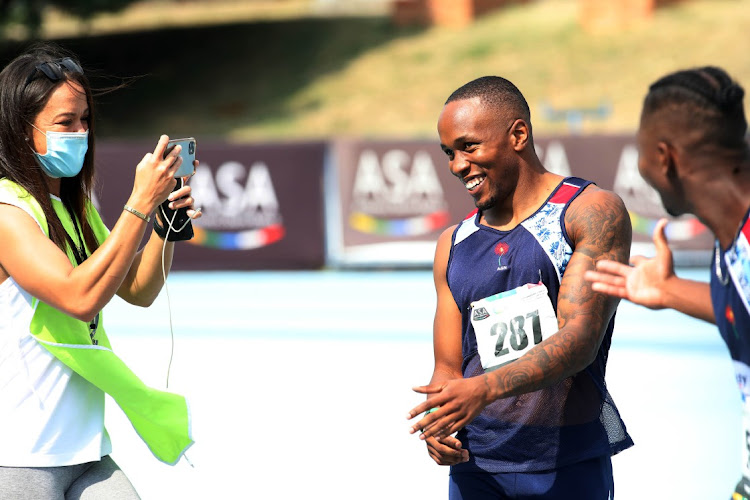 Akani Simbine sounded a warning to the world as he clocked 9.84 sec to break the African 100m record and leave some of the world’s best sprinters eating his dust on Tuesday evening.

The Commonwealth Games champion‚ running at the same track in Hungary where he posted his previous 9.89 SA mark in 2016‚ pulled away from his rivals in the second half of the race.

Wily veteran Mike Rodgers‚ one of four Americans in the line-up‚ was second in 10.00.

Third-placed Marvin Bracy‚ with a season’s best of 9.85‚ and evergreen performer Justin Gatlin‚ who had got the better of Simbine at the 2019 world championships‚ would have needed binoculars to see the SA speedster cross the finish line.

Simbine’s time also eclipsed the 9.85 African mark Olusoji Adetokunbo Fasuba of Nigeria had owned since May 2006 and the 9.86 meet record held by Jamaican Asafa Powell.

It also placed him joint second on the world list‚ one-hundredth of second quicker than Bracy and Ronnie Baker‚ another American.

But the real value of this performance will be the confidence it will give Simbine going into the Tokyo Olympics.

His whole build-up had been aimed at breaking his national record and getting a fast time in his legs to carry into Japan.

Less than an hour later Simbine won the 200m B race‚ registering an unimpressive 20.25‚ although he had to push hard at the end to edge Alonso Edward of Panama by four-hundredths of a second‚ more proof that his top-end speed is on point.

Simbine is now scheduled to run in what could be a dress rehearsal for the Olympic final at the Monaco Diamond League on Friday night.

There he will face the fastest man in the world so far this year‚ American Trayvon Bromell‚ who went 9.77 a month ago‚ and his two compatriots‚ Baker and Fred Kerley‚ with a 9.86 season’s best.

Canada’s Andre De Grasse‚ the Olympic bronze medallist from Rio 2016‚ is also in the race.

Simbine‚ fourth at the 2019 world championships and fifth at the last Olympics‚ is ready to cash in on the silverware.

Wayde van Nierkerk was supposed to compete in the 400m in Budapest‚ but he didn’t take part in what would have been a good test ahead of the Games.

There was no immediate word on the reason for Van Niekerk’s withdrawal.

In the shot put‚ Kyle Blignaut threw 20.94m in the shot put to finish seventh in a field topped by New Zealand’s Tom Walsh on 22.22m.​