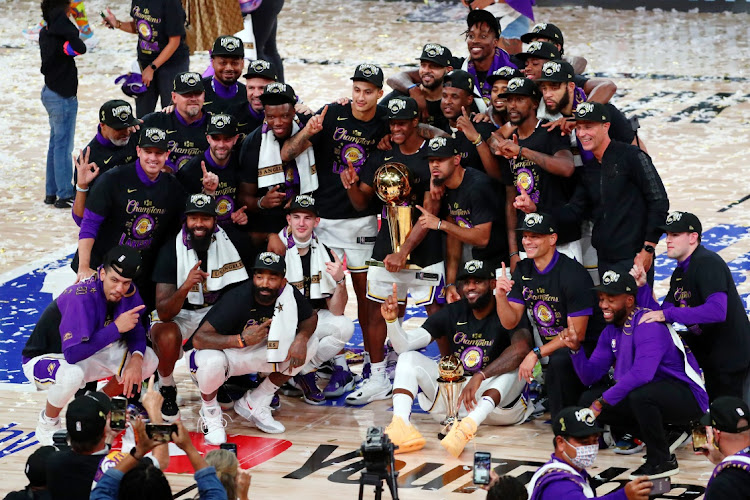 With the Los Angeles Lakers on the way to missing their sixth consecutive postseason last year, LeBron James made a promise to fans that the drought wouldn't last much longer.

The King delivered in 2020, and then some. In a year that has seen the country combat a pandemic and racial injustice and the Lakers franchise deal with the immeasurable loss of an icon, James led Los Angeles to perhaps the most meaningful of its record-tying 17 championships, sealed Sunday night with a 106-93 rout of the Miami Heat in Game 6 of the NBA Finals at the NBA bubble near Orlando.

James capped his fourth championship with 28 points, 14 rebounds and 10 assists in the blowout win. He became the first player in NBA history to be named Finals MVP with three different teams and won the award for the fourth time to trail only Michael Jordan (six) in the league's record books.

"Thinking I have something to prove fuels me," said James, cigar in hand, after his record-setting 260th career playoff game. "No matter what I've done in my career up to this point, there's still little rumblings of doubt, comparing me to the history of the game. 'Has he done this, has he done that.' Having that in my head, saying to myself why not still have something to prove, I think it fuels me."

Partnered with offseason acquisition Anthony Davis, James led the Lakers to first place in the Western Conference in his second season with the club, dominating a regular season played around a 4 1/2-month hiatus brought on by the coronavirus pandemic. Los Angeles went 16-5 in the playoffs, never once losing back-to-back games.

The team also didn't lose sight of the importance of winning in memory of Laker legend Kobe Bryant and daughter Gianna, who died in a helicopter crash in January. "Ever since the tragedy, all we wanted to do was do it for him," said Davis, who had 19 points and 15 rebounds Sunday.

Moments before Los Angeles basketball great Kobe Bryant, his 13-year-old daughter and the seven others perished in a helicopter crash, the pilot had ...
Sport
1 year ago

Rajon Rondo scored 19 for the Lakers, who matched the Boston Celtics for most titles in league history with their first championship since 2010. Kentavious Caldwell-Pope added 17 points.

Bam Adebayo had 25 points and 10 rebounds, while Jimmy Butler and Jae Crowder scored 12 each for the Heat. Goran Dragic returned from four games missed with a foot injury, but it wasn't enough for Miami to force a Game 7 after falling behind 3-1 in the series.

"It's hard, because it was special to us," said Butler of the team's Cinderella run. "We really enjoyed playing with one another, really enjoyed being around one another. I just appreciate it and am thankful that I had the opportunity to be able to do that."

The Lakers never trailed in Game 6, first-year coach Frank Vogel shaking things up from the tip by starting Alex Caruso over Dwight Howard and shifting Davis to center. Caruso had only made two starts all season. The move paid off, as Los Angeles effectively put the game away by outscoring Miami 36-16 in the second quarter.

A 13-0 run in the period, capped by back-to-back 3-pointers from Caldwell-Pope, had the Lakers up by 30, 64-34, with 49.6 seconds left in the half. The margin was 28 at the break, the second-largest halftime lead in NBA Finals history.

Davis and Caldwell-Pope each had 15 points at the break, and Rondo was a spark off the bench with 13 points on 6-of-6 shooting. James had 11 points, nine rebounds and six assists. Butler was held to eight points on 3-of-7 shooting, as the Heat shot 34.2 percent from the floor as a team over the first 24 minutes.

"We didn't get the final result that we wanted," Heat coach Erik Spoelstra said of the disappointing showing. "But these are going to be lifetime memories that we have together."

Intermission did little to slow down Los Angeles, which led by as much as 36 before finishing the third quarter up 87-58. Ahead 103-86 with 1:27 remaining, James and Davis went to the bench to begin celebrating with teammates.

"It doesn't matter where it is if you win a championship -- a bubble, Miami, Golden State," James said. "When you get to this point, it is one of the greatest feelings in the world for a basketball player."