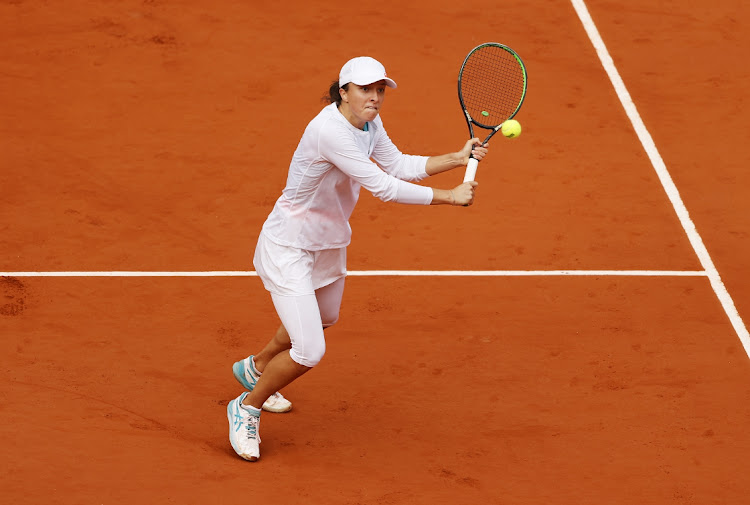 Iga Swiatek of Poland plays a backhand during her Women's Singles semifinals match against Nadia Podoroska of Argentina on day twelve of the 2020 French Open at Roland Garros on October 08, 2020 in Paris, France.
Image: Clive Brunskill/Getty Images

Swiatek had too much poise and power for world number 131 Podoroska, who was looking to become the first qualifier to reach a final at a major in either the men’s or women’s singles draws.

“I’m kind of surprised, really. I always knew that if I would be in a Grand Slam final, it would be at the French Open,” Swiatek said on court.

“I wanted to play this match as a first-round match, I didn’t want to think of it as a semifinal otherwise I would have been too stressed.”

Swiatek, the youngest player to reach the women’s final at Roland Garros since Kim Clijsters in 2001, raced to a 3-0 lead and never released her grip on the opening set despite a poor first-service percentage.

The second set was a mere formality for world number 54 Swiatek, who has lost only 23 games in her six matches at Roland Garros.

She ended Podoroska’s ordeal on the first match point with a service winner. - Reuters

All the way on clay? Williams embarks on latest quest for 24 majors

Serena Williams' latest quest to make history begins when the curtain rises on the French Open at Roland Garros next week.
Sport
1 year ago

World number one Ash Barty may have decided to skip the US Open and the French Open but the coronavirus pandemic has not prevented her from ...
Sport
1 year ago
Next Article