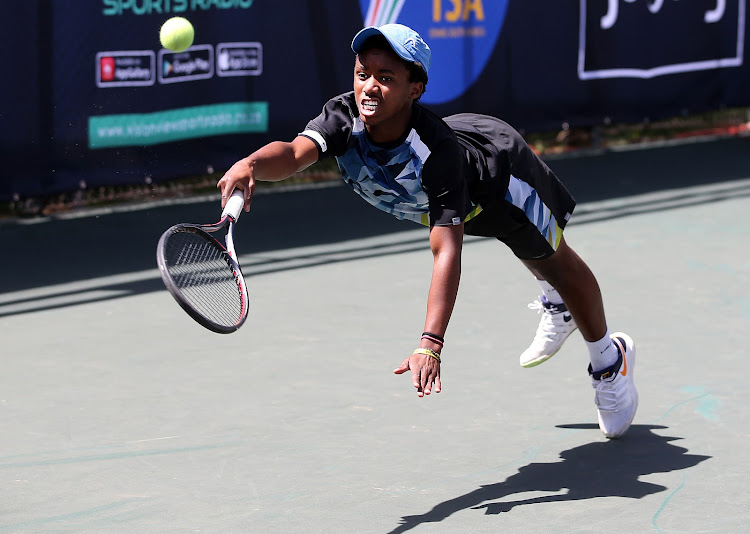 Kholo Montsi in action against the 7th seeded Marco Brugnerotto of Italy in the 1st round of the men’s singles during day 2 of the SA Spring Open at Ellis Park Tennis Centre in Johannesburg on September 25, 2019.
Image: Reg Caldecott/Gallo Images

The 17-year-old Montsi has received his second direct entry into the main draw of a Junior Grand Slam tournament‚ which is scheduled to be played from October 4 to 10‚ and said he is ready to soak up the atmosphere.

“It feels good to be able to play in a junior grand slam‚ especially the French Open‚ because it is one tournament I really wanted to play in.

"My team and I are confident going into this tournament because we have prepared well‚” said the upbeat Montsi.

He will be the first black South African junior player to play at the prestigious tennis tournament in 20 years‚ since Peter-John Nondo in 2000.

“I am sure there have been other black junior players that have played [in the French Open] but to be the first from South Africa in 20 years is incredibly special‚” Montsi said.

“I want to take this opportunity with both hands and come back home with a title.

"I am super happy to be part of this event and competing with some of the top guys in the junior circuit.”

The French Open junior event will be Montsi’s first tournament since March where he lost in the opening round of the Potchefstroom ATP Challenger 50.

“The French Open will be my first tournament in six months and it is a very long time but we have been working very hard.

"I spent the last month on the clay and the moment I received the news that French Open is happening I was on the clay‚” he said.

“We have worked hard especially in the gym on the physical side‚ knowing that the clay is tough.

"We have done the right work. It would be great to go a week early to prepare on the real clay‚ but it is not possible due to Covid-19.”

Montsi is one of South Africa’s up and coming talents with a Junior ITF Ranking of 13 and earlier this year he was included as part of the SA team that participated at the inaugural ATP Cup in Australia.

“Obviously‚ Covid-19 has made things hard for everyone and it is a risky time to be travelling but I do feel safe as we will be in a bubble in Paris‚ so it shouldn’t be too dangerous.

“After waiting so long for tournaments‚ everyone just wants to get out there and start playing again.

"It is a bit scary travelling right now‚ but I think it’s something we all want to do and take the risk.”