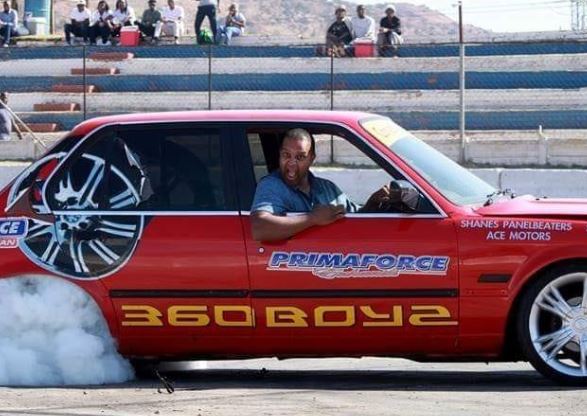 “We want to be like the Springboks” – these are the words of Preshu Singh‚ a South African car spinner who wants to take the emerging sport to the United Kingdom.

Car spinning‚ the one-time misspent activity that emerged from South African township gang culture‚ is now transforming into its next incarnation as a legitimate alternative sport.

Singh‚ the founder of the initiative SA Spin Talent‚ wants to take six car spinners from South Africa to the UK on a tour from June 28‚ to introduce the sport to Britain.

“We want to get the UK into spinning. We want to make car spinning big and give people who have never been on an airplane that opportunity‚” Singh said.

From the coal mining town of Dundee in KwaZulu-Natal‚ Singh was introduced to spinning in 2004.

Since then he has been on the track entertaining crowds‚ and has already begun to introduce the sport in Britain.

“In October last year‚ I went to the UK to introduce spinning. I entertained crowds in Aldershot‚” he said.

Alongside Singh and also aiming to go to the UK tour in June is Stacey-Lee May‚ the first female spinner in the world.

May‚ who was attracted to spinning after experiencing bullying at school‚ started the activity at 16. She had her first accident a week later and wanted to quit.

“I was in high school‚ had just matriculated‚ and I was bullied a lot.

"My father and his friend decided to put me in their fun car. They took me to an empty parking space and gave me instructions‚” May said.

May said although she was shaking‚ she became a semi-professional spinner an hour later.

The 23-year-old is one of the first female spinners to represent SA internationally and the first to receive international media attention and other accolades including a sponsor from one of the biggest energy drink companies.

May is the first spinner to go overseas. She went to Pakistan.

“I did a car spinning in Pakistan and showed that women too can drive‚” she said.

With SA Spin Talent‚ Singh and May want to introduce the sport to the world. They are also looking for sponsors to go to the UK.

“We are still in talks with some sponsors to pay for the team’s travel expenses‚ accommodation‚ food and mechanical operations of the cars‚” they said.

“We want to make things happen with car spinning and create a solid team that will get the same support the Springboks got‚” they added.

The six winners going to the UK are set to leave on the June 24.

The shortlisting of contestants take place at the end of March. Voting lines close April 30. Team selection will be announced at the end of April.