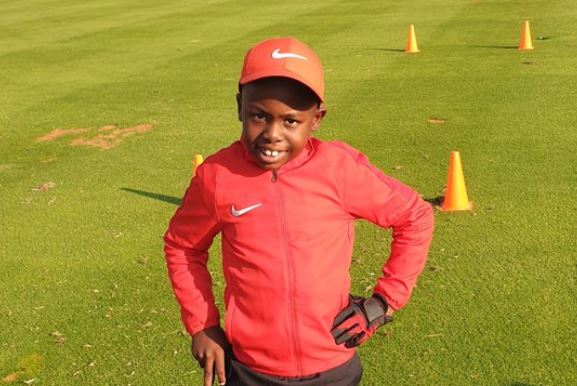 Simthandile ‘Sim Tiger’ Tshabalala is set for a busy time next month when the young golf prodigy jets around the world as he continues to hone his craft.

The seven-year-old has shot to fame in the last six months as he continues to shine on the local and international front‚ which has won him many accolades and no shortage of fans.

He has won trophy-after-trophy on the greens‚ and was also recently named among the Mail & Guardian’s 200 Young South Africans‚ an incredible achievement for a Grade 2 pupil.

And Tshabalala is set to take the next step in his journey when he crisscrosses the Atlantic Ocean next month‚ gaining more international experience.

Tshabalala will play the Kids World Championships in North Carolina‚ United States from August 1-3‚ before a week later taking his place at the British Kids Championship from August 8-9 in Woodhall Spa‚ England.

There will be no rest after that as he crosses the Atlantic again to play the 2019 Canadian Invitational in Niagara Falls from August 12-13.

It is a hectic schedule‚ but all in the pursuit of living his dream of becoming the ‘next Tiger Woods’‚ according to Sim’s father Bonginkosi‚ who will be at his side as his caddy.

“It is a lot of travel‚ but he just loves to play golf‚ so for him this is a dream‚” Bonginkosi tells TimesLIVE.

“It is an amazing experience for all of us and one we are very much looking forward to. It will be great for Sim to test himself against kids from around the world.”

Bonginkosi adds his son’s excellence on the golf course had turned the spotlight firmly on Sim‚ with interviews and appearances on TV shows‚ but adds he has already had a fatherly chat to make sure he stays grounded.

“It has been quite overwhelming for him‚” Bonginkosi says.

“I did sit him down and tell him that he still has a long way to go. That he is still just an ordinary child and that if he wants to become a superstar‚ he must still work really hard.

“But I don’t think that will be a problem. Sim just loves to hit balls and does it every chance he gets.

“This is something none of us expected‚ or planned for‚ so we are all finding our way as a family.”

The obvious question for any parent with a sporty child who needs to travel is how to incorporate school work into their daily lives.

“We share our schedule with the school and they prepare the work for us to do. They have been very supportive‚” Bonginkosi says.

“They are aware of his talent and ability‚ and have worked with us to make it possible for us to travel. So far it has been working really well.”