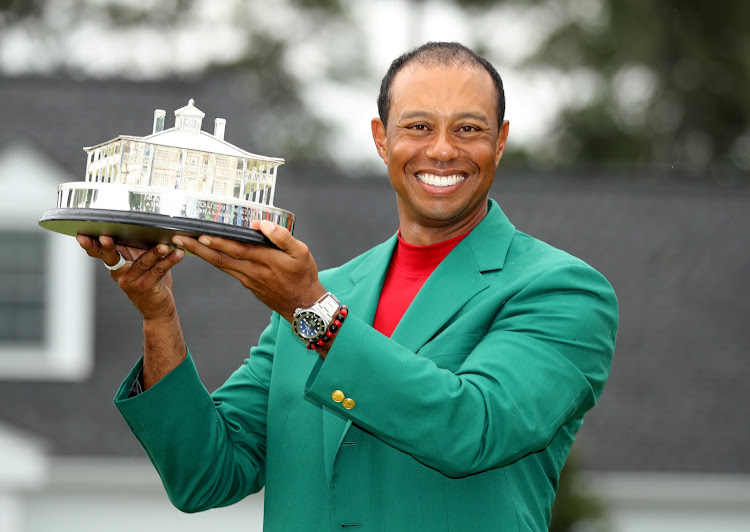 Tiger Woods of the US celebrates with with his green jacket and trophy after winning the Masters at Augusta National Golf Club in Georgia in the US on April 14, 2019.
Image: REUTERS/Lucy Nicholson TPX IMAGES OF THE DAY

The PGA Championship‚ which starts at the notoriously difficult Bethpage Black Course in up state New York on Thursday‚ is teeing off in May for the first time in nearly 70 years.

Since 1972‚ the PGA has been the fourth and final major of the season but with golf’s return to the Olympics‚ the PGA of America negotiated a move forward in the calendar.

The Olympics takes place in late July to August every four years‚ which would have an impact on the PGA Championship.

In addition‚ the biennial Ryder Cup has grown into perhaps golf’s biggest tournament‚ which also was starting to impact on the PGA.

When the PGA Championship was last played in May in 1949‚ the tournament was a matchplay event and it produced a great winner in Sam Snead.

“The process was intriguing‚” said then PGA of America CEO Pete Bevacqua when the decision was made public in late 2017.

“Especially when acknowledging that over its 99-year history‚ the PGA Championship had been contested in nine months: February‚ May‚ June‚ July‚ August‚ September‚ October‚ November and December.

"August has been great‚ but the championship is not inextricably tied to it in any emotional or historical manner.

“In recent years we have enjoyed unbelievable drama in the August slot‚ annually have the strongest field in golf‚ visited some of the very best golf courses in the world‚ and television ratings have been at historical highs for us.

“But we also had to continue to bear in mind that the world was changing around us—the Olympic Games‚ changes in the FedEx Cup‚ the continued dynamic growth of what has become golf’s Super Bowl in the Ryder Cup and the increased‚ almost inescapable density of the PGA Tour wrap-around schedule.

“In short‚ May became more and more attractive.”

The order of the majors has changed but the challenge remains the same for the world’s best players – a chance to etch their names into history.

Tiger Woods‚ winner of last month’s Masters at Augusta in one of the biggest comebacks in all sport‚ is the man everyone will want to see.

Considering he won the 2002 US Open at Bethpage Black‚ and was the only player to shoot under par‚ he has to be the favourite this week.

The pursuit of Jack Nicklaus’ record of 18 majors is back on after Woods collected his 15th major at Augusta last month.

If Tiger wins on Sunday‚ the golfing and sporting world in general‚ will go into meltdown.

But there are many worthy contenders in the field‚ and none more so than defending champion Brooks Koepa.

The strapping American was runner-up to Woods at the Masters while he has won three of the last six majors and added three more top tens. His form is excellent and his steely temperament in the white hot heat of major championship battles is proven.

South Africa is represented by eight players in the field with world No 21 Louis Oosthuizen the highest ranked among them.

Branden Grace could pose a challenge if his putter heats up while Justin Harding‚ who had a wonderful debut at the Masters and a top 10 at the Byron Nelson last week‚ could be a sneaky bet.

Harding has shot up to No 42 in the world golf rankings and is enjoying the time of his life in the past year.