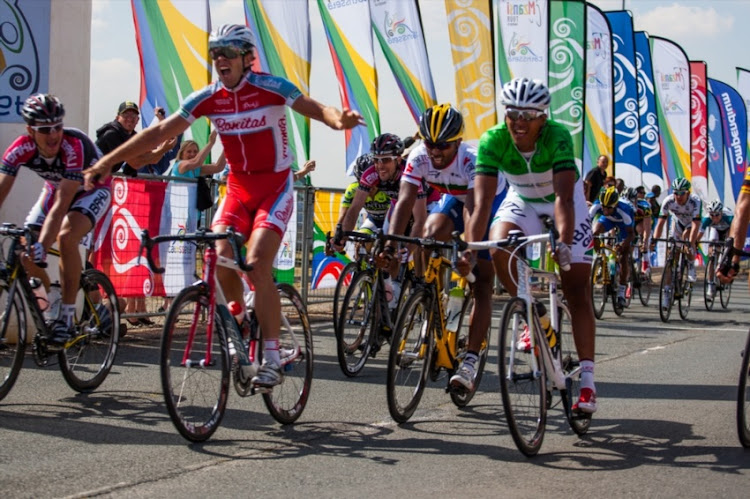 Hermon Fouche from Team Bonitas wins the stage during stage 3 of the 2014 Mzansi Tour from Bethlehem, Free State to Vanderbijlpark, Gauteng on April 11, 2014 in South Africa.
Image: Warren Elsom/Gallo Images

The deepening water shortage crisis in Cape Town‚ when the taps are expected to run dry in mid-April‚ has prompted two of the Mother City’s annual sports events to reassess their approach.

The Cape Town Cycle Tour and the Cape Town Tens rugby tournament are both aiming to be ‘water neutral’ events as level 6B water restrictions (50l per person per day) are implemented.

The 10s celebrates its 10th staging in 2018 and attracts 20000 people over the course of the weekend at Hamiltons Rugby Club in Greenpoint.

“The 2018 CT10s intention is to ensure that it will draw zero litres of drinking water from the municipal supply‚” says 10s Tournament Director‚ Gerhard Odendaal. A number of initiatives are being implemented and will be amplified through an awareness campaign‚ using the hashtag #6BFORME on social media.

Teams have shown their full support and many have arranged their own water‚ are being active around water saving initiatives and being socially pro-active and engaging on all social media platforms in support and co-operation.

In collaboration with the Cape Town 10s‚ associate sponsor Stor-Age will launch a campaign to open all their store facilities around the country to collect bottled water‚ which will be transported down to Cape Town before Day Zero. Former Springbok Rugby Captain Jean de Villiers‚ Cape Town 10s Rugby Patron said: “It is crucial that we create further awareness around the water crisis‚ not only in the Cape.

"We all have roles to play‚ and with the number of popular celebrities attending the event‚ we are in a position to do our bit as water warriors.

"I fully support the #6BFORME initiative and I invite all South Africans to do the same.” The Cycle Tour is into its 41st staging and was initially established to raise funds for charity‚ which remains at its core to this day.

Over the last four decades R109m has been raised for its two primary charities – the Rotary Club of Claremont and the Pedal Power Association.

It also brings in over R500m to Cape Town’s coffers through related expenditure in the week of the race. This year’s race date in March 11.

“It is our intention that the 2018 Cape Town Cycle Tour event day will draw zero litres of drinking water from the municipal supply‚” Tour director Dave Bellairs said. “Eliminating the event’s reliance on municipal drinking water will be achieved through a variety of strategies.

"These include bringing water in from upcountry for drinking and ice on the route‚ and using locally-produced desalinated water for all cleansing purposes.

"Water stations along the route will be reduced to the 14 essential from a medical point of view.

“We believe we have arrived at a solution that achieves the balancing act we were hoping for - one that takes cognizance of our fellow Capetonians’ concerns‚ while ensuring that we are still able to hold the event in order to support the charities that rely on the Cycle Tour and to boost the economy of the City of Cape Town at this time of need.

“After a great deal of thought‚ and discussion with all stake holders‚ the Cape Town Cycle Tour Trust agreed that in addition to taking the Tour off the municipal grid‚ it will offset the water footprint of the estimated 15 000 participants from beyond the Western Cape.

“As a result‚ we can confirm that the 2018 Cape Town Cycle Tour will go ahead.

“It is estimated that visitors coming to Cape Town for the event will use between 1.5 million to 1.750 million litres of water over the duration of their stay.

“The Cape Town Cycle Tour Trust - who represent our two key beneficiaries - has therefore committed to taking some of the money that would have gone to charitable distribution to purchase an amount of two million litres of spring water sourced from only licensed and fully tested suppliers‚ and from an area not experiencing drought.