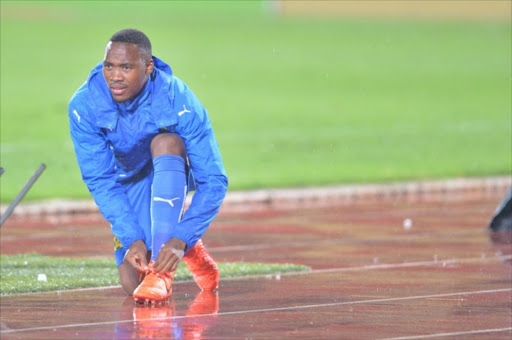 Mamelodi Sundowns coach Pitso Mosimane saw it fit to apologise to midfielder Sibusiso Vilakazi after asking him to warm up but didn't play him in the 2-1 win over Platinum Stars on Tuesday.

Vilakazi, a big-name signing from Bidvest Wits seven months ago, was promised by Mosimane that he was going to come off the bench against Stars.

But the coach was forced to change his mind and explained afterwards why it was necessary to apologise to Vilakazi.

Sundowns had to make two forced changes due to injuries to Anele Ngcongca and Anthony Laffor, whose places were taken by Thapelo Morena at halftime and Leonardo Castro on the hour mark respectively.

Mosimane was then left with one substitution to make, and with the teams deadlocked at 1-1 by the 80th minute, "Jingles" decided Yannick Zakri was best suited to replace Themba Zwane in search of the winning goal, which came via the boot of Khama Billiat in the 84th minute.

As a result, Vilakazi was left out in the cold and that means he has now made just one appearance in their last four matches, which was from the bench in injury time against TP Mazembe in the Caf Super Cup last weekend.

"I spoke to him and I apologised to him. I told him that he would play (against Platinum Stars), honestly speaking I told him," confessed Mosimane.

"On a pitch like this [considering the persistent rain], I can't pull out all my punches at the same time - all the subs. You could see in the game we had to have another one [sub] in the last five or 10 minutes.

"So I only had one sub left and you could see that I needed to play on a break because there was space behind [in Stars' defence].

"So who are you going to put in? Zakri, who's got speed or Vila, who would control the ball? I didn't need to control the ball because I wanted to score. So I had to put in someone who's going to punch a little bit harder," he said. "I apologised to Vila, but I think he will play against (Bidvest) Wits on Saturday. I hope he plays," Mosimane said.