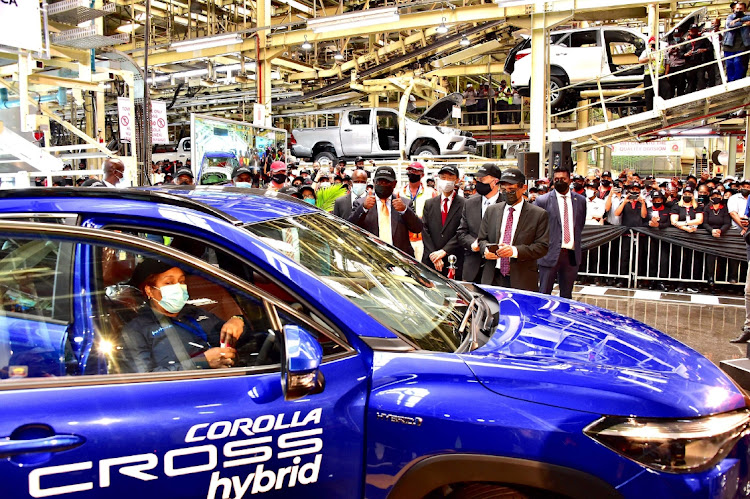 Toyota recently announced massive investments in KwaZulu-Natal that will lead to more jobs in the province.

The first production run of the Toyota Corolla Cross Hybrid vehicle was recently celebrated in KZN, with President Cyril Ramaphosa present to witness the achievement.

The production of the Corolla Cross on home soil will result in Toyota investing R2.6bn in the country. The Corolla Cross is the first generation of commercial-scale hybrid electric vehicles to come off a South African assembly line.

According to Ramaphosa, this development is more than simply a new model coming off a production line, it also shows that the country is embracing  the opportunities for a green economy. SA is one of only seven global locations for the production of this hybrid car, along with Japan, America, Brazil, Thailand, Malaysia and Taiwan. The president believes that is a testament to the skilled, productive workforce and competitive plant.

“During the plant tour, I met workers who are passionate and committed and I saw the value of the skills programme management has put in place,” he said.

The Corolla Cross will be exported to 40 countries across Africa, which will boost the African Continental Free Trade Area.

“I am advised that the company will seek to ramp up its projected 4,000 hybrid vehicles planned for next year, if the availability of batteries improves,” the president said.

He added that the R2.6bn investment by the Japanese multinational automotive manufacturer is a vote of confidence in the country.

Toyota SA chief executive Andrew Kirby said the company has invested over R6.1bn in the plant over the past five years. “So, we’re therefore committed to further developing and strengthening our business in SA.”

Ramaphosa thanked Toyota for its support following the unrest in the province in July.

Toyota has created 575 new jobs at the plant and a further 1,200 new jobs have been created in supplier companies.

The auto industry is one of the drivers of the country’s localisation programme and a significant contributor to the gross domestic product, accounting for more than 100,000 jobs.

Ramaphosa said Toyota is also looking at increasing the number of new local suppliers from the global supply chain, which is key in the Economic Reconstruction and Recovery Plan.

“I am advised that there are 56 local suppliers for this new model, of which 16 are black-owned companies,” he said.

Ford SA confirmed on Wednesday that its Silverton assembly plant in Pretoria produced its 500,000th Ranger pickup for the export market at the ...
News
2 months ago

These were the 15 fastest-selling used vehicles in June

There is reason for “cautious optimism” when it comes to the used car market in South Africa. That’s according to George Mienie, CEO of AutoTrader, ...
Good Life
1 year ago
Next Article