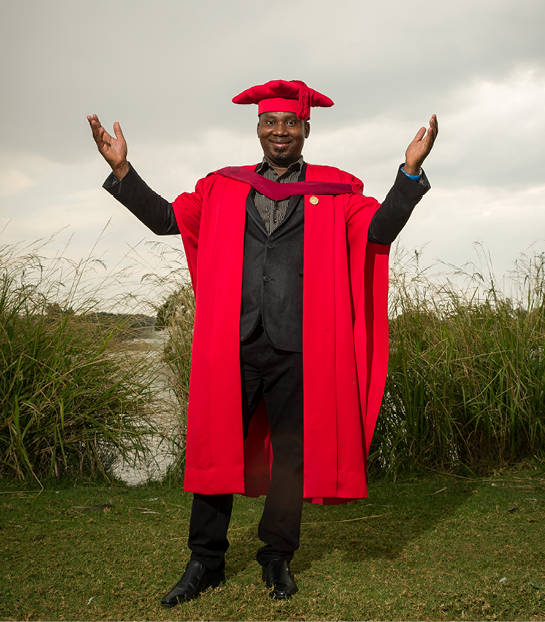 Dr Perekeme Mutu is proof that with hard work and determination, nothing can stand in the way of one’s dreams.
Image: Supplied.

Dr Perekeme Mutu has achieved what not many could even dream possible. He recently graduated with not one, but two university degrees – achieved simultaneously

By working odd jobs at a car wash and later as a night-time security guard to fund his studies, Mutu has proven that resilience is the key to academic success.

“The end is always rewarding,” says Mutu, who believes in the power of education to change one’s life and the value of a strong support system.

“My parents were not educated. However, I was inspired by my niece who also has a PhD and whose husband is a medical doctor.

“She supported me from the beginning, when I first came to the country [from Nigeria in 2007] and began my academic journey.

Mutu adds that his first degree from UP, a bachelor’s degree in political science was a challenging experience.

“Everything was different, from cultural differences to the functioning of the library system© I had very little knowledge of how to use a computer,” he says.

Even when he realised he lacked the funds to pay his second-year tuition fees,  Mutu wasn’t discouraged, and instead looked for odd jobs.

“Most often I finished my studies for the day at 4pm. After that, I would go to the car wash to wash cars until about 7pm. At the end of the week, I paid whatever I could into my university account,” he says.

“My niece accommodated me so I didn’t have to worry about accommodation or food. My sole focus was to raise money for my fees.”

In his second year, Mutu found work as a security guard, which paid better and he was able to put more money into his student account.

In 2014, after completing his undergraduate and postgraduate degrees, Mutu joined UP’s Centre for Human Rights and started studying towards a Master of Philosophy degree in Multidisciplinary Human Rights.

When the opportunity arose to do his PhD, due to a UP bursary, he took on his LLB simultaneously at UNISA.

Of his achievements he says: “You have to be mentally and physically prepared for the journey ahead.”

Dr Thakgalo Thibela, who hails from a village in Bushbuckridge, Mpumalanga, matriculated at the age of 15, in 2015, with seven distinctions.
SebenzaLIVE
9 months ago
Next Article