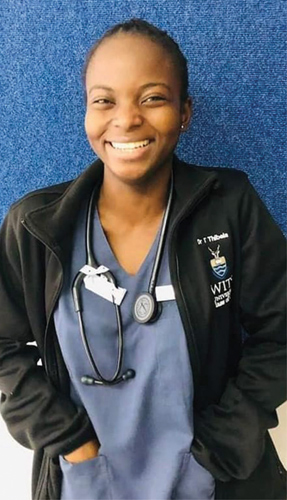 Dr Thakgalo Thibela, who hails from a village in Bushbuckridge, Mpumalanga, matriculated at the age of 15, in 2015, with seven distinctions.

Six years later she received her Bachelor of Medicine and Bachelor of Surgery from the University of Witwatersrand.

Despite her tender age, she is already hard at work on the frontlines of the Coronavirus Disease (COVID-19) pandemic, working as a doctor at a busy public hospital.

In January, her lifelong dream became a reality when she started working at the Helen Joseph Hospital in Johannesburg, making her one of the youngest people to practice as a medical doctor in South Africa and proving that a person’s circumstances do not have to dictate their future.

She is following close in the footsteps Sandile Kubheka, who made South African history in 2014 by qualifying as the youngest doctor ever at the age of 20.

The go-getter says being a doctor at such a young age has not posed extra challenges for her.

“When I treat the patients, who come to the hospital, they always ask me about my age and are full of compliments when I tell them,” says Dr Thibela.

Starting her career in the middle of the COVID-19 pandemic has been a unique experience. She says it has reinforced the need for healthcare workers to be mindful of their own personal safety when treating patients.

“When you are in the emergency department, you must get to the next patient quickly, but in treating patients in the time of COVID-19, I have learnt that you have to protect yourself first by wearing personal protective equipment.

“It is only when I am protected that I am able to help other people. When I consult a patient, especially one who has tested positive for COVID-19, I must wear gloves, mask, a face shield and gown.”

When she completed her matric in 2015, she wanted to apply to study medicine only but was persuaded to have a back-up plan by her older sister and thus also applied to study nuclear science.

She was accepted for the latter and was about to register for the course when her dream came calling.

“I was set to go register to study nuclear science when I received a call from Wits University, saying that I had been accepted to their medical school and that I should go and register the following day.”

In a class of her own

The youngster grabbed the opportunity with both hands and left her home in the rural village of Violet Bank for the bustling city of Johannesburg, where she quickly had to adapt to independent living and a faster pace of life.

Being in a class with people who were older than her was not intimidating, however, because, having skipped two grades in school, being the young student in class was nothing new.

Due to her academic prowess, the young Thibela skipped Grade Seven at Farel Primary School. She repeated the remarkable feat at Lehlasedi High School when she was promoted to Grade 10 without having to do Grade Nine.

“In high school, I was always the youngest in my class so by the time Wits came around, I was used to it. I never really felt the age gap because I matured early in life,” Dr Thibela says, explaining that no-one at university made her feel that her age was an issue.

Dr Thibela says that the next step in her journey is to pursue a career as a surgeon.

How to report your injury on duty to the Compensation Fund

When you sustain an injury while on duty or contract an occupational disease including covid-19, here are simple steps to follow.
SebenzaLIVE
1 year ago

Youth can help defend SA from the coronavirus

Dr Nokukhanya Khanyile (28) works in the paediatric department at the Rahima Moosa Mother and Child Hospital in Johannesburg. As a young doctor, she ...
SebenzaLIVE
1 year ago
Next Article