Women uniting to protect each other to end GBVF 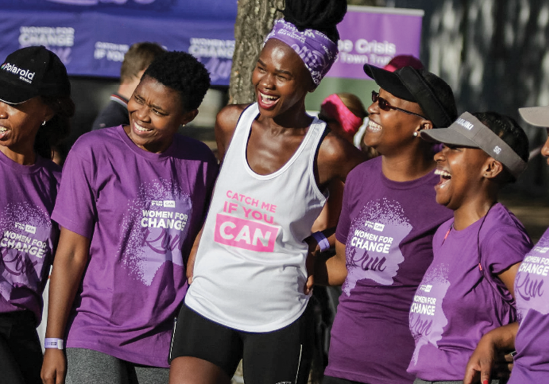 Women runners are uniting to protect each other and to stand up against gender-based violence and femicide.

Everyone should actively demand change and do something to end gender-based violence and femicide (GBVF).

This is what the founder of Women For Change, Sabrina Walter, believes will end the continuous attacks on women and children in South Africa and globally.

The Women For Change movement was founded in 2016 by Catch Me If You Can (CMIYC), which was also started by Walter.

“Women For Change creates awareness to end GBVF through nationwide running events and awareness campaigns. Our running events also support non-profit organisations (NPOs) that work on the frontline of GBVF, such as Rape Crisis, Tears Foundation or The Safe House,” explains Walter.

“We use our social media channels daily to educate our society, support those NPOs that help survivors and create awareness nationally and globally,” she adds.

Walter describes GBVF as South Africa’s real epidemic and says the number of incidents is unacceptable.

“The fight to end GBVF in South Africa is long overdue. Women do not feel safe. We are all affected by crime, directly or indirectly – therefore, everyone should be active in demanding change,” she says.

Through the Women For Change campaign, Walter hopes to keep the conversation going and create a platform where women can unite for change and educate each other.

“As women, we need to stand united to put an end to violence against women and children. We will fight for our freedom, and we won’t stop until there’s no woman out there saying #MeToo anymore.”

Due to the Coronavirus and lockdown regulations, all CMIYC running events for 2020 were cancelled.

“However, three weeks later we started launching Women’s Virtual Challenges and Races, with over 10 000 women joining those virtual events in 2020,” she says.

This year’s Women For Change 5 and 10km virtual races will take place on 9 August. Entries open in May and women, men and children are invited to participate.

WATCH | The mothers on the frontlines of the HIV epidemic

2001 was a traumatic time to be living with HIV in South Africa.
SebenzaLIVE
4 weeks ago

There is help at hand for victims of gender-based violence (GBV) who cannot afford legal services.
SebenzaLIVE
1 month ago
Next Article