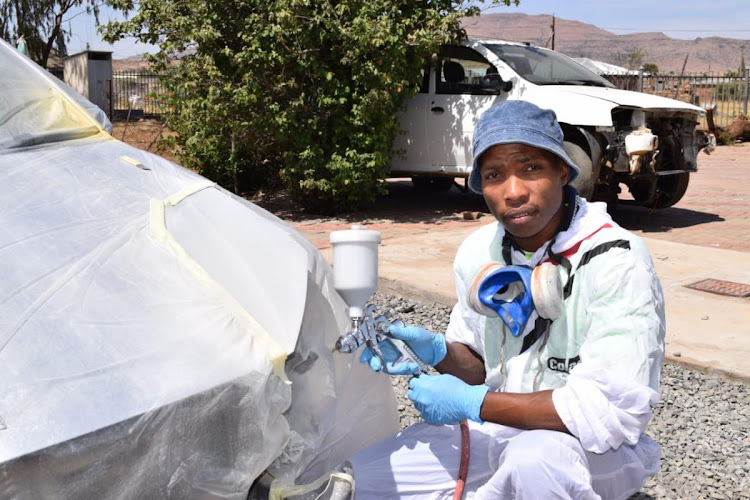 A passion for fixing cars has lead Senekal Makhele to run a growing business, despite a tough childhood, today Makhele owns his own panel beating and spray painting business in Thaba Nchu.

The 26-year-old lost his mother early in life and although his sister cared for him initially, he was eventually taken in by a neighbour. Despite his tragedy, Makhele said he has always been surrounded by love.

When he was in Grade 11, Makhele had the opportunity to assist a local panel beater work on his family car after it was involved in an accident.

“He equipped me with panel beating and spray painting skills and I quickly fell in love with what I was doing,” he said.

Makhele always loved cars and as a child, he would craft toy cars from wire. Panel beating seemed a natural fit and he began working part-time for the panel beater, who Makhele said realised his passion and advised him to study towards a qualification in panel beating and spray painting.

Taking his employer’s advice, he completed a Level 3 panel beating and spray painting qualification at Motheo Technical and Vocational Education and Training College in Bloemfontein.

“My adoptive mother has always been supportive and paid for my tuition fees until I completed my artisan certificate,” he said.

Makhele gained experience working at backyard panel beaters and at formal businesses, before being offered an apprenticeship at Sovereign BMW in Bloemfontein.

After saving to buy his own equipment, he eventually took the plunge from employee to entrepreneur.

“Watching videos on how other panel beaters worked and how they managed to open their own businesses inspired me to consider starting a company. I also attended an entrepreneurial workshop that was organised by the National Youth Development Agency and a youth camp that was hosted by the provincial Department of Social Development, where I was further motivated by other young entrepreneurs whose businesses were doing well,” he said.

Twaks Motor Body Works was registered last year and after doing private jobs while completing his apprenticeship, Makhele already has a growing client base.

Mampe Mmeregi (60), the owner of Temaretha Agriculture Training School and Temaretha Piggery Farm in Gauteng, has trained several farmers in her ...
SebenzaLIVE
2 years ago

According to a study by the SA Journal of Human Resources in 2012, 31.1% of employees have reported to being bullied in the workplace.
SebenzaLIVE
2 years ago
Next Article