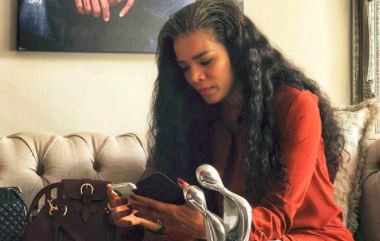 Connie Ferguson is still at the top of her game and looking stunning.
Image: Via Instagram/Ferguson Films

It's no secret that Connie Ferguson is one of the sexiest queens in the entertainment industry and her beautiful figure has always been there and well maintained but when Mzansi saw her abs last night, they were shook!

It's not that it was impossible for her to push a six pack, tweeps said, it was that she hasn't been all "Cassper" about it and when she dropped that short video, her army of fans just couldn't believe it.

The consensus was that if tweeps had abs like Connie's they would live in crop tops.  But when Connie shared the video, she was just talking about her gym pact with her girls.

"The way I didn’t feel like going to gym today after a long day at work! But we made a pact with my sisters that we will pull each other up when we feel like slacking!"

The way I didn’t feel like going to gym today after a long day at work!? But we made a pact with my sisters that we will pull each other up when we feel like slacking! Cava my little victory dance after conquering @mzi_wa_choko6 ‘s class at @fightclubsa Honeydew!?????? By the way that’s my attempt at the nae nae!?? Operation kapha kapha kapha in full swing!???❤️ #operationnoflabbyarms #gotsofalayobatlang #packsquad #TheQueens #YearOfTheQueen #4to49 #GeminiSeason

Most tweeps lost their appetites after seeing how magnificent Connie looks and we're quite certain many have decided to walk past the magwinya stall this morning because the amount of stress on these streets was too much!

Just check out the shock for yourself bellow:

Me after seeing Connie Ferguson's six pack on Instagram pic.twitter.com/f4yzyTBtxD

This could be me??but I don’t want to run mma ko khoneng wa magwinya out of business..someone must support black business ??? Ous Connie and her squad are representing me??? ? pic.twitter.com/1cUBkQSXDo

I greet you in the name of Connie Ferguson and her body pic.twitter.com/GtMQxrwDtC

After seeing why Connie was trending???? pic.twitter.com/TFYOo2Gxbo

@Connie_Ferguson literally just forced us to go to gym? pic.twitter.com/EupLxjr2Lh