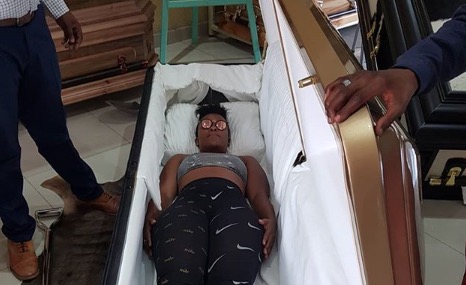 It's the perfect fit at R150k.
Image: Instagram/Zodwa Wabantu

While Zodwa Wabantu's latest "coffin shopping spree" seemed straight up outrageous for many, her decision to plan and fund her own funeral was inspired by real-life events that have scarred her for life.

Zodwa told TshisaLIVE that it was the memory of burying her mother with the cheapest coffin and the most affordable resources that have pushed her to prove the people who told her she'd have the same fate, wrong.

"When we buried my mother, it was a sad affair. She was buried in a cheap coffin and her funeral came together on things that were patched together. People always told me that I would never amount to much and would suffer the same fate, so I've been living my whole life trying to prove them wrong," Zodwa said.

Black Society this is Taboo. Being Black🤣🤣🤣🤣🤣🤣

As the mother of a teenage boy, Zodwa said she didn't care for people that frowned upon what she did because she said that if people had money they'd do the same.

"I don't even feel that what I did was really as people made it out to be. I mean, if you think about it, everybody at some point goes through that process for someone they love. The difference is that I decided to spare my son the work and the financial stress. Other people do the same thing through policies and whatever, but I deal with cash."

Zodwa said the R150k she forked out was not only for the coffin, but for all the trimmings necessary to ensure that she has a dignified funeral when the time comes.

She said while she liked the fact that the coffin she will be buried in is gold, it was more about the peace of mind that everything else will be sorted that made her happy.

"When I walked in, they (funeral parlour people) didn't think I was coming to buy myself a coffin. They assumed I was doing it for a family member.  But when I asked to get in it and try it out then they realised that I was serious. The coffin is probably between R50 and R70k. The rest of the money went towards the executive package, which include the cars and other services."

Death. Black Society is Scared to talk about Death. My Coffin ⚰ is 150k. Are you ready or your Family is still gonna Run around? I don't want Zodwa Wabantu was Famous now there's no Money to Bury her