Leaving the madam's party got Mmusi his groove back 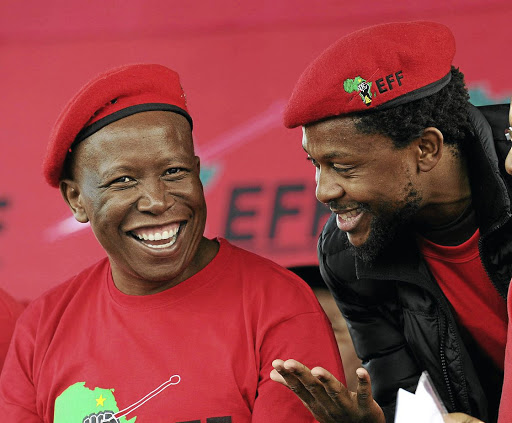 A cousin of mine recently sent me an old video of the EFF leadership in a heated exchange with someone who is not shown on camera.

However, you can sense the weight of the issue from the intensity of Malema's tone.

The clip must have been taken from a phone camera with a very low resolution - but you'd swear it is Malema's anger that darkened the room and made partly cloudy with a good chance of thunderstorms.

Then there was Mbuyiseni Ndlozi sitting right under the CIC's underarm, measuring about a third of his leader's stature. He almost waits for Malema's anger to peak before also barking up a storm.

He attempts to stand up even; perhaps aware that his tantrums hardly stir anyone in the midst of Juju's commanding fury.

What drew my attention before I even watched the recording was that my cousin's accompanying text read: "Look how mad Ndlozi gets. This is so cute. Lol", and that was my exact sentiment as I watched.

See, Dr Ndlozi is our national Bae. His politics are less prominent than his looks and the title of "Fighter" is a misfit on him. He is so cute, and that is his revolution.

Remember in parliament how he would use his academic aptitude and actually substantiate everything he said with a rule from the book? And then every time he said something offensive, he would just stand there and smile. Beautiful!

This made me think about just how some politicians will always be associated with certain symbols and their careers almost revolve around them. Ndlozi's Bae status is just as prominent as Zuma and song, Terror biting the hat, Willie Madisha's hong-hong-hong mocking of Naledi Pandor's accent, Jeff (Radebe) and the C.L.I.T and that bad taste we still have in our mouths after Gigaba's faux pas.

There has, however, been one guy who is seemingly the exception. Mmusi Maimane! I mean, have you seen, heard and read his stuff lately? Just a few days back he dragged Madame Zille. In public. On his birthday nogal. Who would have thought that we would witness such a time, and would believe that he is genuinely gatvol with the blue bloods.

It is almost like he has always wanted to say the things he is saying on social media of late - but his employment contract was telling him to take a seat and calm down. I am one of the sceptics who doubted that Maimane could ever redefine himself. He was always trying too much to be black and white and nice all the time.

But I see there is a change in him. He is one of those "I re-invented myself after divorce" stories, and severing ties with the DA has indeed brought us a refreshing perspective of him. Maimane is a new man, and you can see that his white coat is off.

The witty, unapologetic and slap-back Maimane is likeable and quite entertaining, I must say.

He is relatable. Well, OSAM sounds like a kiddies club for younglings who want to do awesome staff at the mall together. But I am sure there are people out there who will be listening and considering joining his struggle.

The Constitutional Court on Friday dismissed an application by former DA leader Mmusi Maimane's One South Africa Movement to halt the reopening of ...
News
2 years ago

Founder of the One South Africa movement Mmusi Maimane has announced that he intends taking government to court over the reopening of schools on June ...
News
2 years ago
Next Article