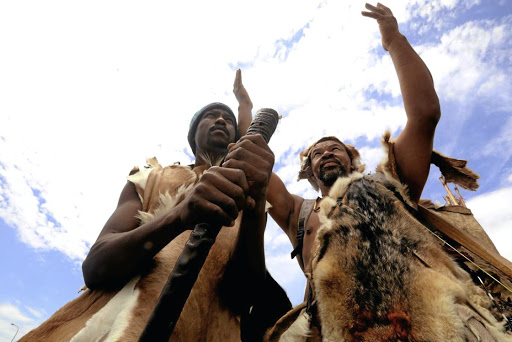 Coloured people do not easily accept the idea that "KhoiSan" communities are black African, according to scholar Michelle Ruiters.
Image: Fredlin Adriaan

The land debate has been raging in mainstream debate for a few years now, and although it is a very serious matter, South Africans always manage to find the humour in the pain.

In 2016 Fees Must Fall activist Ntokozo Qwabe infamously wrote on his restaurant bill: "We will give tip when you return the land," reducing a white waitress to tears. Since then, many land-themed retorts have been mobilised in response to white entitlement.

The issue has been clearly framed: the grievance is against white land ownership enabled by the cruelty of the 1913 Land Act which disenfranchised generations of black South Africans. Within the conversations around reform, there have been some unexpected dissenting voices from a group of people who call themselves KhoiSan or "First Nation" people.

I have found this discourse difficult to engage, but I believe we ignore it at our own peril. The people who identify themselves in this way are often racialised as coloured, but believe that they are direct descendants of the indigenous people of the country, and are therefore first in line to claim the land over all other black citizens.

This rhetoric is ironically reminiscent of the coloured exceptionalism fostered during apartheid, but more importantly, brings some issues to light.

The first is the issue of the KhoiSan. The term is a colonial amalgamation of two communities, Khoi and San, coined by German zoologist Leonard Shultze. There never was such a nation as KhoiSan and neither does it exist today. More alarming is the way in which this construction of indigeneity distances itself from blackness in an attempt to deny the rights of other black people to African land.

This is often done through invoking the white supremacist narrative of black invasion by the Xhosa. History shows that Xhosas and indigenous tribes were very amicable neighbours, and that when the San were being hunted by colonialists, they were given refuge and assimilated into the Zulu nation. At this stage in our history, it is safe to say bloodlines are not one dimensional, which brings me to the second point.

Racial purity is a white supremacist myth and proponents of this First Nation agenda, as do many of us, push the idea that they are descendants of "pure" bloodlines.

The political work that the term "pure" does when referring to human beings is very violent and has been used to stigmatise creole communities such as coloured people in SA, who are considered impure or mongrelised. The idea of racial mixing or "miscegenation" is one of the most powerful fear mongering tools white supremacist thought has used to justify racial segregation.

After an almost three-week hunger strike four Khoisan activists have ended their protest on the lawns of the Union Buildings in Pretoria.
News
4 years ago

The discourse of indigenuity invokes an anti-blackness comfortably nestled in the crevices of many coloured identities, and although the First Nation have rejected this identity they have not rejected its indoctrination.

Scholar Michelle Ruiters reminds us that coloured people do not easily accept the idea that "KhoiSan" communities are black African - an evident rejection of blackness.

Yes, we can all agree that our indigenous communities are terribly neglected by our government and we expect much more from them. However, we cannot address this injustice using colonial tropes and through invoking the worst elements of identities we claim to reject to escape accountability.

More importantly, any claim to land that excludes the black majority yet again and twists history for wicked ends is not valid.