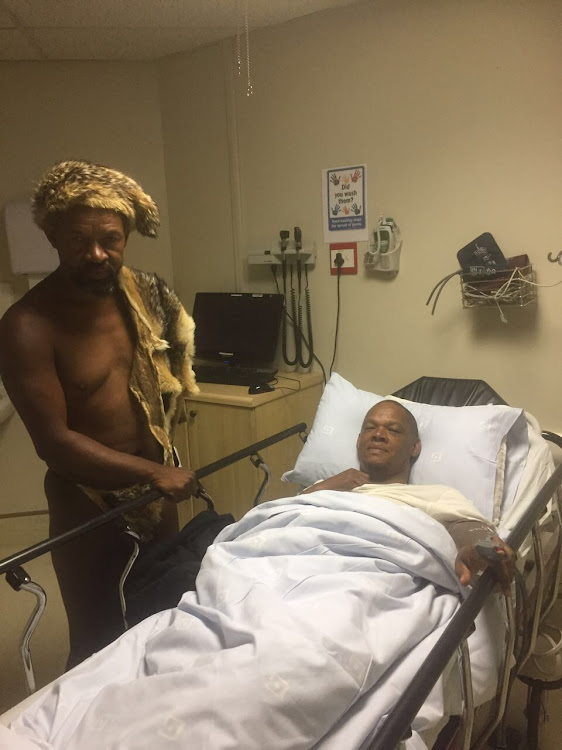 Christian Martin‚ one of the Khoisan Four who walked from Port Elizabeth to the seat of government in Pretoria‚ was admitted to hospital on Wednesday after experiencing chest pains.
Image: Supplied

Four Khoisan activists say they are prepared to leave the Union Buildings in body bags if government continues to ignore their grievances.

The warning comes after Christian Martin‚ one of the Khoisan Four‚ was admitted to hospital on Wednesday after experiencing chest pains. He had flown in to join three other activists who had walked from Port Elizabeth to the seat of government in Pretoria.

The group has been on a hunger strike for the past 14 days.

Martin was assessed by medics and discharged from hospital last night. Doctors warned him that his body is taking serious strain as a result of the hunger strike but the group has vowed to press on.

“We are still on hunger strike. We only drink water. Things will remains like this until we hand over our memorandum to the president or his deputy‚” said one of the activists‚ who calls himself Chief Khoisan SA.

The men have been camping outside the Union Buildings for weeks‚ demanding to meet with President Jacob Zuma or Deputy President Cyril Ramaphosa over issues of land and identity.

The group also spent the last five days outside the Nasrec Expo Centre‚ hoping to meet Zuma or any member of the ANC top six on the same issues. But their attempts failed after police blocked them at the venue‚ where the ANC was holding its national conference.

Minister in the Presidency Jeff Radebe met with the group before the conference and informed them that a meeting with the president might be scheduled in January. The group told him that they will camp outside the Union Buildings until the proposed meeting occurs.

“We want to meet the president over four demands. We want government to recognise the Khoisan as the First Nation of South Africa‚ we want the land claims of 1913 and the Coloured identity to be scrapped‚” Chief Khoisan said on Thursday.

“We also want our language to be recognised as an official language of this country. We won’t leave the Union Buildings until we engage with the president or his deputy on these demands. They can continue to ignore us but we are not going anywhere. If it means we have to die outside the Union Buildings‚ then let it be.”

Four Khoisan men are threatening to camp outside Nasrec until a member of the ANC Top 6 hears their demands.
News
4 years ago
Next Article