Moscow's mood ahead of Victory Day mixes anxiety and resilience 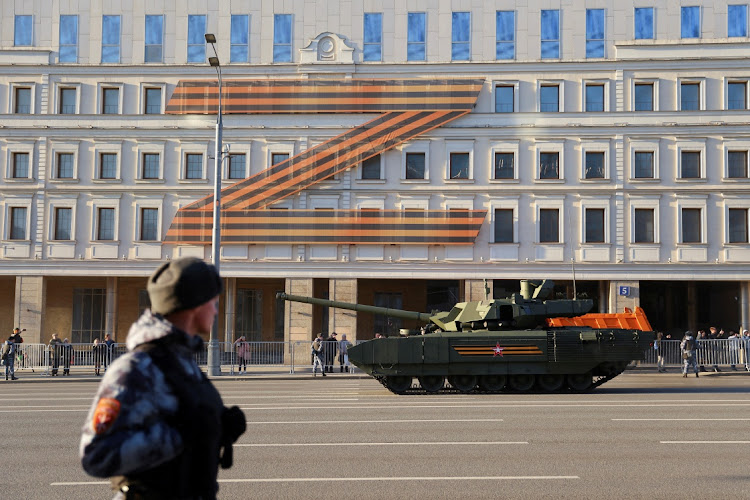 Russian service members drive a tank along a street during a rehearsal for the Victory Day military parade in Moscow, Russia May 4, 2022.
Image: REUTERS/Evgenia Novozhenina/File Photo

Moscow residents appeared anxious but resilient as the country prepared on Sunday for its annual commemoration of the Soviet victory over Nazi Germany with an economy reeling from the West's most stringent economic sanctions in modern times.

As Russia's military operation in Ukraine grinds towards the end of its third month, President Vladimir Putin will underscore the enormous sacrifices made by the Soviet Union to defeat Adolf Hitler in World War 2 in a Victory Day speech in Red Square on Monday.

The sanctions imposed by Western nations since Putin launched the invasion of Ukraine on Feb. 24 have tipped Russia towards its worst economic crisis since the years following the 1991 fall of the Soviet Union, though the Kremlin says it will build up its own production while seeking new markets in Asia.

Some Russians said they were anxious and emotional given the close family ties between the two biggest eastern Slav populations now divided by conflict.

“Emotionally it affects you because I have two sisters living in Ukraine,” said Larisa, one Muscovite who spoke to Reuters. “Of course, it is very difficult to communicate with them now — very difficult. They have their own information war going on now.”

But Larisa, who like several others spoke on condition that her surname was not used, also said patriotism was rising in Russian society.

“In Russia as a whole, there is a lot of cohesion now among the masses in connection with these events: what I can say is that patriotism is growing,” said Larisa, in Moscow's affluent Patriarshiye Ponds area.

Russian opposition activists say that state-run media give a partial account of the conflict and independent media have been stifled. Russian officials say Western media have reported an excessively pro-Ukrainian version of the conflict while ignoring Moscow's concerns.

One man, Dmitry, spoke of the “constant tension” of the situation while a woman called Evgenia said the conflict had been a blow.

Russian forces fired rockets at an encircled steel works in Ukraine's southern port city of Mariupol and thick smoke blackened the sky at the plant ...
News
3 weeks ago

“For me, this is a very strong psychological blow, and almost all of my inner circle is experiencing the same thing,” said Evgenia, who mentioned many “for sale” signs in her area of Moscow.

Victory Day is a major public holiday in Russia these days. The Soviet Union — made up of Russia, Ukraine and other Soviet republics — lost 27 million people in World War 2, more than any other country. Putin has railed in recent years at what Moscow sees as attempts in the West to revise the history of World War 2 to belittle the Soviet victory.

Putin says he launched what he calls a “special military operation” in Ukraine to prevent the West from using Ukraine to threaten Russia and to root out people he calls dangerous nationalists. Ukraine and the West say Russia launched an unprovoked war of aggression.

In one elite Moscow restaurant, there was a sense of foreboding mixed with a nascent confidence that Russia would endure — and even use the crisis as an opportunity to thrive long term.

Maria Podzolko, the director of Selfie, a restaurant awarded a Michelin star last year, said that some of the exuberance had gone — and wine prices had risen sharply as there was not yet enough domestic production.

“Selfie is an expensive restaurant — there is a certain contingent of guests here for whom the crisis is more emotional than economic,” Podzolko told Reuters.

Around 100 Ukrainian civilians were evacuated from the ruined Azovstal steelworks in the city of Mariupol on Sunday, Ukrainian President Volodymyr ...
News
3 weeks ago

“Almost all birthdays have been cancelled,” Podzolko said. “Corporations cancelled all major events because everyone was hostage to such deep stress and our fine dining suffered the most.”

Since chef Anatoly Kazakov always worked with Russian produce, Selfie still offers a menu of delicacies including sea urchins from Murmansk, scallops from Sakhalinsk in the Pacific, and duck from Rostov in the south.

“The deficit that has been created will give an opportunity for domestic production and domestic trade to develop,” said Podzolko.

Selfie, which sits in the shadow of one of Josef Stalin's so called Seven Sisters skyscrapers, offers an array of Russian wine though the foreign wine is expensive.

A bottle of 2009 Chateau Roc de Cambes from Cotes de Bourg in France is listed in the menu at 46,000 roubles ($683), though it costs less than $100 a bottle in London, according to wine searcher websites.

The average monthly wage in Russia is 57,344 roubles.