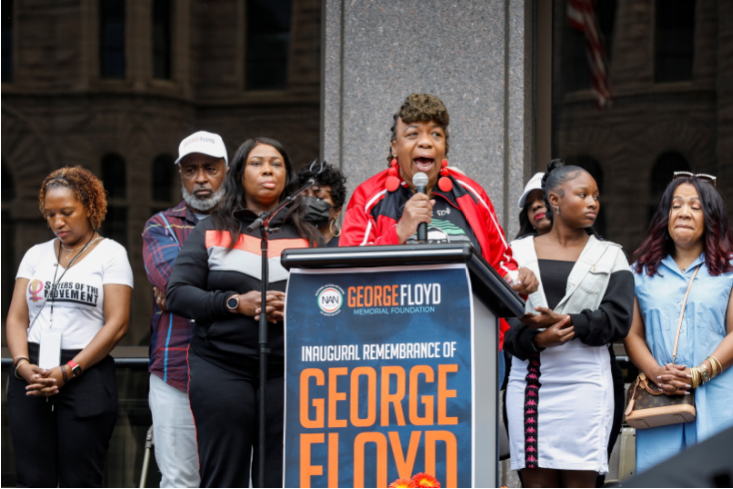 Gwen Carr, mother of Eric Garner, speaks onstage during the "One Year, What's Changed?" rally hosted by the George Floyd Global Memorial to commemorate the first anniversary of his death, outside the Hennepin County Government Center in Minneapolis, Minnesota, US on May 23, 2021.
Image: REUTERS/Nicholas Pfosi

Relatives of George Floyd, the African-American whose death triggered protests against racism and police brutality across the United States and around the world, gathered on Sunday in a rally to mark the first anniversary of his death.

Floyd died after a Minneapolis police officer knelt on his neck for more than eight minutes on May 25 last year. His dying words, "I can't breathe," became a rallying cry in a wave of street demonstrations against his killing.

Floyd's family took to the streets of Minneapolis on Sunday and marched with hundreds of people in the first of several events planned nationwide to mark the anniversary of his death.

Many people in the crowd carried signs with pictures of Floyd and other Black people killed by police.

"It has been very frustrating for me and my family for our lives to change in the blink of an eye - I still don't know why," she said, referring to her brother's death.

Other speakers at the event included Floyd family attorney Ben Crump and civil rights activist Reverend Al Sharpton, who has called for an end to racial inequality in the criminal justice system with the demand "get your knee off our necks."

The George Floyd Memorial Foundation, a nonprofit launched by Floyd's siblings in September to fight racial inequality, is hosting a series of events in Minneapolis in the coming week to honor Floyd.

"George Floyd should not go down in history as someone with a knee on his neck, but as someone who broke the chain of police brutality and illegality," Sharpton said.

Former Minneapolis policeman Derek Chauvin was convicted on Tuesday of all three charges of murder and manslaughter in the deadly arrest of George ...
News
4 months ago

US to probe Louisville, Kentucky, police after Breonna Taylor death

The US Justice Department on Monday launched a civil probe of the Louisville, Kentucky, police department whose officers last year fatally shot ...
News
4 months ago
Next Article