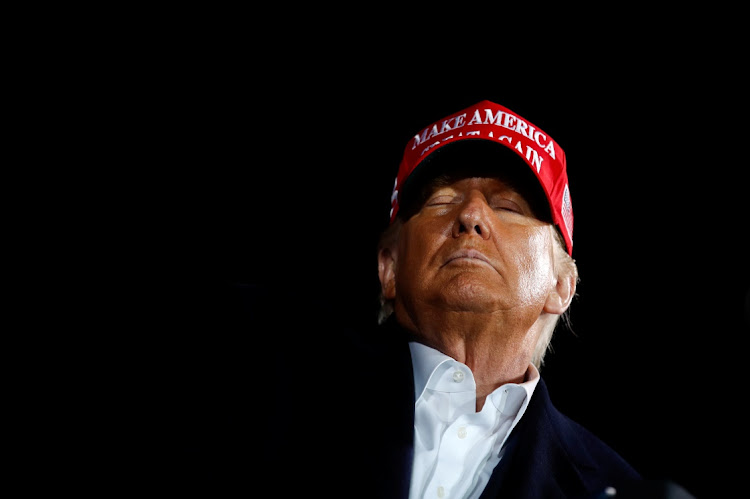 Trump has sought to convince states to reopen schools and return to normal, but teachers' unions have fought the move, arguing that teachers could be infected by their students.
Image: CARLOS BARRIA

Under siege over his handling of the novel coronavirus pandemic, President Donald Trump on Wednesday cited what he said was his son's mild bout of the virus as a reason why American schools should reopen as soon as possible.

Republican Trump made the comment about his son, Barron, while at a rally at the Des Moines, Iowa, airport on a mission to shore up support in battleground states that he won in 2016 but is in danger of losing to Democratic candidate Joe Biden barely three weeks before the election.

Biden announced via Twitter that his campaign raised $383 million in September, adding to a campaign warchest that is already dwarfing the Trump campaign. Biden has $432 million cash on hand, the campaign said.

Melania Trump said in a statement earlier in the day that the virus that struck both her and her husband had also infected their 14-year-old son.

“I don't even think he knew he had it," he said of Barron, "because they're young and their immune systems are strong and they fight it off. 99.9% and Barron is beautiful. And he’s free."

Trump has sought to convince states to reopen schools and return to normal, but teachers' unions have fought the move, arguing that teachers could be infected by their students. Funding for protective measures at schools has been caught up in a partisan fight in Washington.

Trump's Iowa stop is part of a barnstorming tour across states critical to deciding who will win the Nov. 3 election. He is trailing Biden in national and some battleground state opinion polls.

"Twenty days from today, we’re going to win this state," Trump said on a windy night in Des Moines, where many in the crowd were not wearing masks to guard against the virus that has killed nearly 216,000 Americans.

On Thursday he will be in North Carolina and Florida, on Friday he will campaign in Florida and Georgia and on Saturday he will speak in Michigan and Wisconsin. All of these are states he won in 2016 but are in danger of going to Biden this year, potentially denying Trump a second term.

He is expected to spend Saturday night in Las Vegas, Nevada, and then swing through western states.

Trump repeated a vow to bring most U.S. troops home from Afghanistan soon as part of his bid to halt "endless wars." The promise has raised concerns within the Afghan government that a US pullout could leave the country more vulnerable to the Taliban.

Trump on Wednesday pulled into a statistical tie with Biden in hotly-contested Florida at 47% vs 49% with a credibility interval of four points, a Reuters/Ipsos opinion poll showed, though Biden had a 10 percentage point advantage nationally among likely voters.

On Thursday, Trump and Biden, who had been due to hold a second presidential debate, will instead take part in dueling televised town halls. NBC News said Trump's event in Miami would take place outdoors to prevent the spread of the coronavirus.

That Trump, who fell ill with the virus earlier this month, is traveling to Iowa so close to Election Day suggests his campaign is concerned about voter support there for his re-election. Trump beat Democrat Hillary Clinton in the state by almost 10 percentage points in 2016, but opinion polls have shown Iowa to be competitive.

Nearly 15 million Americans have cast ballots, setting a record early pace, according to the US Elections Project at the University of Florida. Many are seeking to avoid the large crowds expected on Election Day.

In the last presidential election, some 1.4 million Americans had cast early votes as of Oct. 16, 2016.

Iowa has experienced a spike in Covid-19 cases, with hospitalisations at an all-time high. Republican Governor Kim Reynolds has resisted any statewide containment measures such as a mandate to wear masks and urged Trump supporters on social media to turn out en masse for the president.