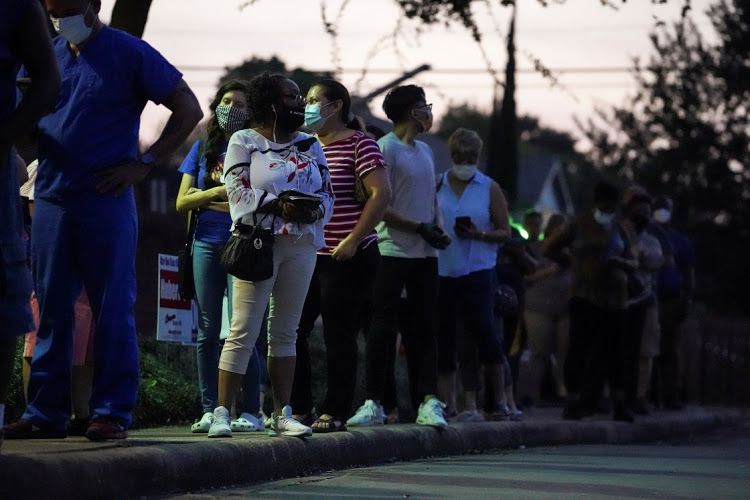 Long lines of voters snaked out the doors and down the sidewalks at polling places in cities around the state, social media videos showed, with some people showing up long before the doors opened to claim a spot.

With three weeks left until the election, Americans have cast more than 10 million early votes in person and by mail across the country, according to data compiled by the U.S. Elections Project.

A bitter fight for the White House and control of Congress has helped inspire the high turnout, and many Americans are casting ballots early to avoid Election Day crowds amid coronavirus safety concerns. By way of comparison, as of Oct. 16, 2016, some 1.4 million Americans had cast early votes.

Interrupted repeatedly by US president Donald Trump in their presidential debate on Tuesday, an exasperated Joe Biden resorted to insults and ...
News
1 year ago

"Voting as early as possible and making sure your vote counts is the best way to end the craziness of this year," said Brandon Marcy, 40, who stood in line for 45 minutes to vote for Biden at a Lubbock, Texas, grocery store.

Tina Wilson, a 58-year-old Republican, voted for Trump in Lubbock after waiting in line for about 30 minutes. She regularly votes early but felt a more urgent need this year because of concerns about the pandemic and the logistics of voting.

"I’m ready for 2020 to be over with and I hope the election will help us move forward as a nation," Wilson said.

Both Texas and Georgia are normally Republican-leaning but have emerged as competitive states in the presidential race this year as Biden holds a steady lead in national opinion polls over Trump and expands his campaign into new territory.

Trump won Georgia by 5 percentage points in 2016 and Texas by 9 points, but opinion polls show Biden running close in Georgia and slightly trailing Trump in Texas.

In Georgia, more than 128,000 people cast ballots during Monday's first day of in-person early voting, breaking the previous record of nearly 91,000 votes in 2016, according to the secretary of state's office.

Almost 1.6 million absentee ballots have been requested in the state, with more than 473,000 returned and accepted. In 2016, the total number of absentee votes in Georgia was fewer than 208,000.

"Georgia is seeing record turnout for early voting because of excitement and enthusiasm of the upcoming election," said Walter Jones, a spokesman for the Georgia Secretary of State, adding that "long lines are to be expected."

In Texas, election officials in Harris County, which includes Houston and is the state's most populous county, said by mid-afternoon on Tuesday that the first-day turnout had set a new record of 68,000 votes with about five hours to go until polls closed.

The surge in early voting has sparked legal battles in many states as Trump has claimed without evidence that mail ballots lead to fraud, an assertion dismissed by election experts. Democrats lost challenges to voting rules in Georgia and Texas as the early voting began in both states.

In Georgia, a U.S. district judge ruled against Democrats who proposed easing long voting lines by requiring changes including reallocating voting machines and providing backup paper ballots. The decision came after the hours-long lines on Monday.

The first-day delays in Georgia were exacerbated by breakdowns including a software problem in voting machines and glitches with the equipment used to check in voters.

In Texas, a federal appeals court late on Monday reinstated an order from Republican Governor Greg Abbott that limits absentee ballot drop-off sites to only one per county, regardless of population or size.

In Virginia, where early voting has been under way for three weeks, a cut cable caused the state's voter registration system to crash on Tuesday, the last day to register to vote before Election Day. The Virginia Department of Elections said the site was restored at mid-afternoon.

U.S. President Donald Trump will try to put his bout with COVID-19 behind him when he returns to the campaign trail on Monday, beginning a three-week ...
News
1 year ago

More than 10 million early votes in US presidential election - study

US voters have cast more than 10 million votes for the Nov. 3 presidential election, significantly outpacing the early vote in 2016 and suggesting a ...
News
1 year ago

President Donald Trump on Thursday rejected plans for a virtual debate on Oct. 15 with Democratic rival Joe Biden, a format switch intended to reduce ...
News
1 year ago
Next Article