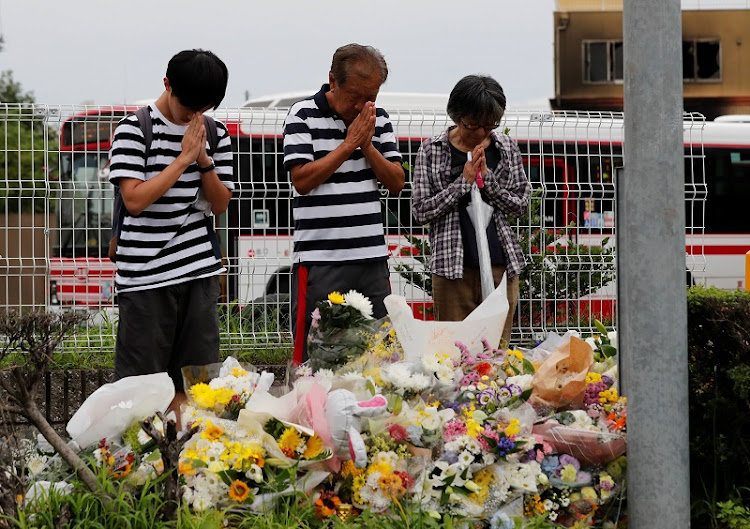 People pray in front of a row bouquets placed out for victims of the torched Kyoto Animation building in Kyoto, Japan, July 20, 2019.
Image: REUTERS/Kim Kyung-Hoon

Many victims of an arson attack on a Japanese animation studio were young with bright futures, some joining only in April, the shaken company president said on Saturday, as the death toll climbed to 34.

Thursday's attack on Kyoto Animation, well known for its television series and movies, was Japan's worst mass killing in two decades. It was all the more poignant because of the youth of the victims in a country where the population is among the world's oldest.

Many of the victims of the attack, in the ancient capital of Kyoto, were young women, company president Hideaki Hatta said.

"Some of them joined us just in April. And on the eighth of July, I gave them a small, but their first, bonus," he said.

"People who had a promising future lost their lives. I don't know what to say. Rather than feeling anger, I just don't have words," Hatta said.

The studio had about 160 employees with an average age of 33.

Police have confirmed the identity of the suspect as Shinji Aoba, but have declined to comment further.

Aoba lives in a modest, two-floor apartment building 500 km (310 miles) from Kyoto in a rural suburb just outside Omiya, a commuter hub north of Tokyo.

A 27-year-old neighbour said Aoba had once grabbed him and yelled at him over a noise dispute.

"He started yelling at me to my face to shut up. He grabbed me by the collar and started pulling my hair. It was terrifying," the neighbour, who declined to be identified, said.

Aoba had been convicted of robbery in the past and is suspected of carrying out the arson attack because he believed his novel had been plagiarized, Japanese media have said.

But Hatta, the company president, said he had no idea about any plagiarism claim, adding he had not seen any correspondence from the suspect.

People living near the studio said they saw a man fitting Aoba's description in a nearby park the day before the attack. Police suspect he may have spent a day or more in the area to prepare.

Resident Rie Bannai said her nephew saw the man sleeping on a bench in the park.

Police have not formally arrested Aoba, as he is being treated for heavy burns, NHK said, but have taken the unusual step of releasing his name.

Rui Yamaguchi, who works in a factory nearby, said he saw the suspect when he was detained.

"He looked like a mannequin with no hair and blackened. One of his pants legs had gone around his calf. It looked like it had burnt off," he said.

Near the blackened studio building, where the smell of burning timber lingered over the neighbourhood, animation fans gathered to add to a growing pile of flowers, drinks and other offerings.

Bing Xie, 25, a Chinese student at Kyoto University, said she could not forgive the arsonist.

A suspected knifeman who attacked three elementary school children in broad daylight on a Tokyo street was being held by police on Friday after a ...
News
8 years ago

"The criminal who does this seems to have been mentally disturbed, but I can’t forgive him. The young people at Kyoto Animation were beautiful and warm and it is hard to accept they are gone."

Police guarded the site as investigators, some on the roof near where many died in a connecting stairwell, examined the blackened building.

Hatta said the building needed to be torn down because it was so badly damaged.

Tributes to the victims lit up social media, with world leaders and Apple Inc's chief executive offering condolences. The hashtag #PrayforKyoAni, as the studio is known among fans, has become popular.

Kyoto Animation produces popular "anime" series such as the "Sound! Euphonium". It is also known for "Violet Evergarden", which has been shown on Netflix.

A Japanese court upheld the death sentence imposed on a man who ploughed a truck into a crowd of shoppers before stabbing passers-by in a rampage ...
News
9 years ago

Japan marked the 67th anniversary of the world's first atomic bomb attack with a ceremony that was attended by a grandson of Harry Truman, the U.S. ...
News
9 years ago
Next Article