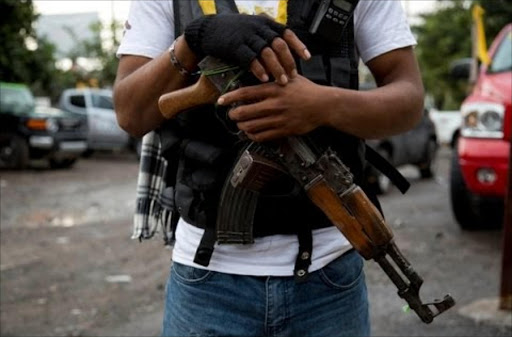 Vigilantes are searching an extensive cave system in the hunt for the last fugitive boss of the Knights Templar drug cartel, a "self-defense" group leader in western Mexico said Thursday.

Vigilante leader Estanislao Beltran said there are signs the cartel had used the caves near the town of Arteaga in Michoacan state.

"I think they used it as a hideout," said Beltran, who had descended about 100 meters (yards) into the caves. "We found evidence."

Three days ago, vigilantes accompanied by federal forces took control of Arteaga, which is the hometown of Servando "La Tuta" Gomez, the only one of the cartel's top four leaders who has not been captured or killed. Gomez once served as a school teacher in the area and had some support among townspeople because his gang handed out money to residents.

Beltran said some townspeople tried to prevent the vigilantes from entering Arteaga to hunt for cartel gunmen, as self-defense groups have down in more than a dozen townships in Michoacan over the last year. But he contended the demonstrators in Arteaga acted under threat from the cartel and said many people were becoming more trustful of the vigilantes.

Residents want to get the local iron ore mines re-opened so the area's economy can start again. The government cracked down earlier this year on the Knights Templars' extensive involvement in iron ore exports to China.

The vigilantes sprang up in February 2013 to fight the cartel's extortion demands, kidnappings and killings. Armed with assault rifles, they travel from town to town in pickup trucks and set up highway checkpoints, seeking to expel cartel gunmen from the largely agricultural state.

The government is trying to register and reign in the vigilantes, to avoid copy cats and infiltrators, like dozens of members of a rival cartel who were arrested earlier this week in Michoacan wearing vigilante-style T-shirts.

The federal government has given the vigilante groups until May 10 to demobilize, which is usually understood as handing in their largest-caliber weapons and ending armed patrols. The government has offered them the option of signing up as members of an army-controlled Rural Defense corps.

Beltran said other self-defense fighters may become municipal policemen. Many of the state's local cops have been fired or re-assigned, in part because of suspected links to crime gangs.