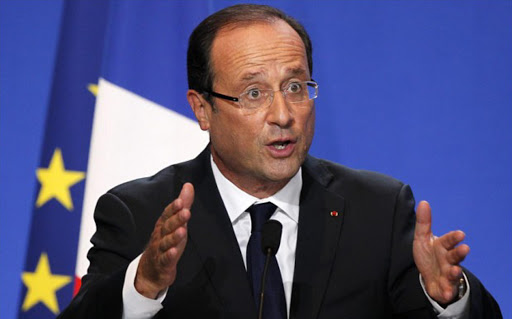 French magazine Closer on Friday said President Francois Hollande was having an affair with actress Julie Gayet, promising to back its claim with photographs after months of swirling rumours.

The weekly tabloid's website said its Friday print edition would feature seven pages of revelations and pictures on the 59-year-old president's alleged relationship with Gayet.

Closer, echoing reports published on various websites in recent days, said Hollande routinely drives through Paris on his scooter to spend the night with his 41-year-old mistress.

"Around New Year's Day, a helmeted head of state joined the actress at her apartment, where he has got into the habit of spending the night," Closer wrote on the website, which carries a blurred picture of the cover that appears to show Hollande.

The French presidency did not immediately respond to AFP's request for a comment.

Closer said the pictures raise security concerns by showing that the head of state is accompanied by only one bodyguard when he treks halfway across Paris to Gayet's flat.

The bodyguard "even brings the croissants", Closer said.

Hollande lives with his partner Valerie Trierweiler, a journalist for whom he left fellow Socialist politician Segolene Royal, the mother of his four children.

Gayet, who appeared in one of Hollande's 2012 election commercials, filed a complaint in March over rumours of the affair which she said were a breach of privacy.

Gayet is an established television and cinema character actress who has appeared in more than 50 films. She is the mother of two children.

If confirmed, Hollande's relationship with Gayet would perpetuate a long French tradition of philandering presidents and senior politicians.

Jacques Chirac is believed to have had many extra-marital conquests, as was his predecessor Francois Mitterrand, who even had a daughter born to a mistress.

Valery Giscard d'Estaing was also described as an incorrigible womaniser. He even hinted in a recent book at an affair with Princess Diana.

The French are known for being tolerant of their leader's gallivanting, which has often proved to have little or no negative impact on popularity ratings.