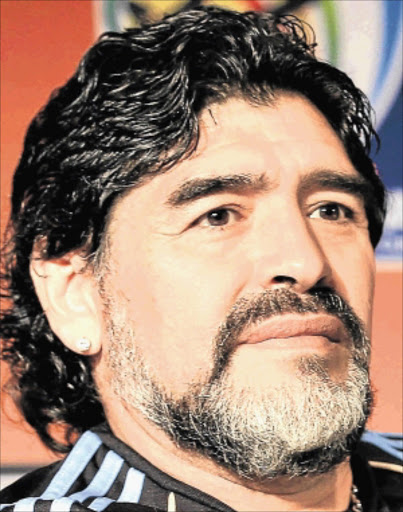 Maradona accuses the companies of using his name and picture for an online gaming site without asking his permission, news agency Xinhua said.

A cartoon image of Maradona in his Argentinian blue and white-striped national team shirt could still be found at the game's website qiuqiu.9c.com, on Friday morning, Xinhua added.

However, it appeared to have been removed later in the day when AFP checked.

Maradona's agent in China, Tang Qinghui, told AFP that she could not comment on the case.

However, sources told Xinhua that the 51-year-old is seeking 20 million yuan ($3.2 million) in compensation.

Tang said Maradona is in China to discuss with football officials how the game can be developed in the country at grass roots level.

But there has been speculation in the Chinese media that he is being lined up to become coach of the national football team.

"They did not talk about the national coach job," Tang told AFP.

Tang said Maradona -- who became a hate figure among England fans following his infamous "Hand of God" handball goal at the 1986 World Cup -- will also be giving advice to referees and coaches in China.

CFA spokesman Dong Hua also said that the manager's position was not discussed.

"He met with our vice chairman Wei Di but they did not discuss this matter," he told AFP.

However, the national team is already out of the running for the 2014 World Cup after it failed to get through a qualifying group topped by Iraq.

The national team has only qualified for one World Cup, in 2002, when it lost all three games and failed to score a single goal.