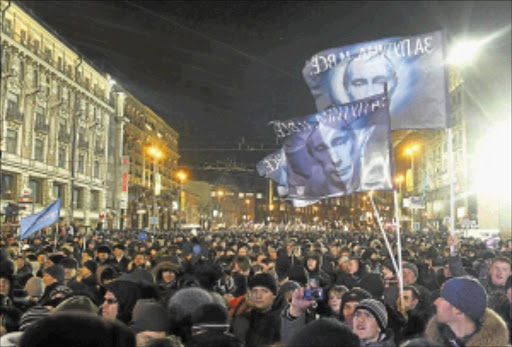 INTERNATIONAL monitors said yesterday that Russia's presidential election was clearly skewed to favour Vladimir Putin, a verdict that could spur protesters planning to take to the streets to challenge his right to rule.

Putin, who secured almost 64% of votes on Sunday, portrayed his emphatic victory for a third term as president as a strong mandate to deal with the biggest anti-Kremlin protests since he rose to power in 2000.

But vote monitors from the Organisation for Security and Co-Operation in Europe watchdog echoed complaints by opposition leaders who said the election was not fair.

"The point of elections is that the outcome should be uncertain. This was not the case in Russia," said Tonino Picula, one of the vote monitors.

"According to our assessment, these elections were unfair."

OSCE monitors said Putin was given a clear advantage over his rivals in the media and that state resources were used to help him extend his domination of Russia for six more years.

They called for all allegations of voting irregularities to be thoroughly investigated.

Although the observers' findings have no legal bearing, they undermine Russian election officials' statements that there were no serious violations and confirm the concerns of many voters.

"It's not the people who choose, it's the authorities who choose themselves.

"It's all just a game put on for the people, an advertisement for Putin," said Agil Alekberov, who works in a Moscow furniture store.

Putin's opponents, fearing he will smother political and economic reforms, have refused to recognise the result, which could allow the former KGB spy to rule Russia for as long as Soviet leader Leonid Brezhnev, accused of presiding over "the years of stagnation".

Putin has already served as president or premier for 12 consecutive years and made way for his ally, Dmitry Medvedev, in 2008 because of constitutional limits.

"He (Putin) is forcing things to breaking point. He is declaring war on us," said journalist Sergei Parkhomenko, one of the protest organisers.

Yesterday's protest took place within easy reach of the Kremlin and officials say the demonstrators could cause trouble by attempting to march towards the seat of power.

Some protest leaders have received official warnings to be on their best behaviour from Moscow prosecutors.

With Putin and the opposition on collision course, the Kremlin issued a statement that could be intended to take the sting out of the protests which began over alleged fraud in a Parliamentary poll on December 4.

Medvedev, who will stay in office until early May, told the prosecutor general to study the legality of 32 criminal cases, including the jailing of former oil tycoon Mikhail Khodorkovsky.

Khodorkovsky, who headed what was Russia's biggest oil company, Yukos, and was once the country's richest man, was arrested in 2003 and jailed on tax evasion and fraud charges after showing political ambitions and falling out with Putin.

The Kremlin said Medvedev had also told the justice minister to explain why Russia had refused to register a liberal opposition group, Parnas, which has been barred from elections.

The order followed a meeting last month at which opposition leaders handed Medvedev a list of people they regard as political prisoners and called for political reforms.

Medvedev's initiatives "have only one goal: To at least somehow lower the scale of dismay and protest that continues to surge in society", Communist Party leader Gennady Zyuganov was quoted as saying.

The move could be a stalling tactic intended to appease the organisers of the biggest protests of Putin's rule, or it could be a parting gesture by a man intent of making his mark as the more liberal of the ruling "tandem" with Putin.

Zyuganov was second on just over 17% and liberal billionaire Mikhail Prokhorov had almost 8%.

"There were practically no serious violations," Central Election Commission chief Vladimir Churov told reporters, dismissing the allegations of irregularities across Russia by the opposition and volunteer vote monitors.

Golos, an independent monitoring group, said it had registered at least 3100 reports of violations nationwide.

Many voters, especially in the provinces, see Putin as a safe pair of hands and credit him with restoring order after the chaotic 1990s under President Boris Yeltsin and overseeing an economic boom.

But others have lost all faith in elections and see Putin as an impediment to Russia having a fair, decent society.