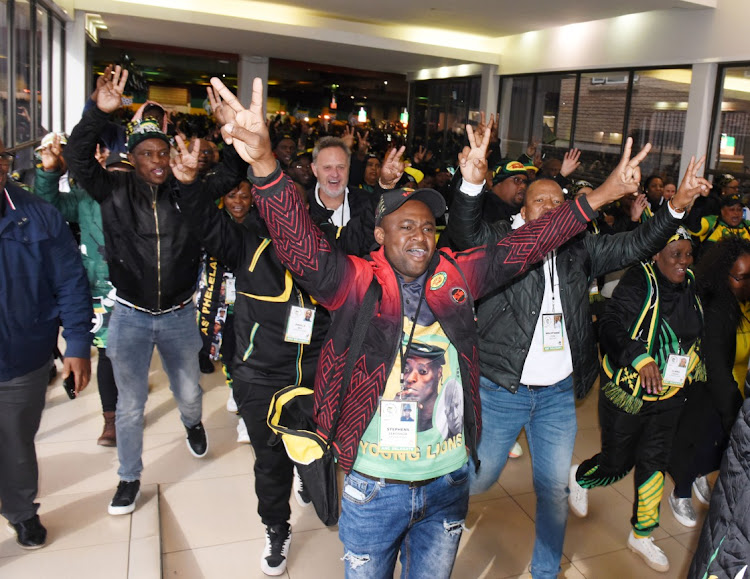 The move to scrap the ANC’s step-aside policy was defeated on Sunday, with President Cyril Ramaphosa saying there had been an overwhelming view to retain and strengthen the rule which bars criminally charged members of the ANC from occupying leadership positions.

Leading to the conference there was a growing push from provinces such as KwaZulu-Natal, Limpopo and the Free State to scrap the ANC’s rule adopted at the 54th national conference.

Delegates at the sixth policy conference held at Nasrec said there had been heated discussions around the policy, adding that Limpopo provincial chairperson Stan Mathabatha had led the charge for the rule to be scrapped.

A delegate from Limpopo said the province had left the conference feeling divided due to the hard line Mathabatha took.

“The province is extremely divided because we feel that he’s changed his mind a lot. But one thing hasn’t changed though and that’s the fact that we still want Ramaphosa to be elected for a second term,” the insider said.

Ramaphosa told delegates there would be no scrapping of the step-aside policy but rather the ANC would strengthen it.

“The overwhelming view of policy conference is for the retention of the step-aside provisions to enhance the integrity of the movement and its leadership. Conference noted strong concerns on the perceived lack of consistency in the application and implementation of the policy. Conference agreed that these must receive urgent attention so that the application of the guidelines is impartial, fair and consistent.”

ANC former deputy president Kgalema Motlanthe says the party’s constitution is enough to deal with corrupt members in the organisation.
News
2 weeks ago

During the three-day policy conference held at Nasrec those inside said the Eastern Cape, Northern Cape and North West had formed a bloc that vehemently opposed the scrapping of the step-aside resolution.

Speaking to Sowetan, Saul said the ANC was at its weakest, adding that now was the time to strengthen the ANC, including its renewal measures.

“We need to give South Africans a reason to trust the ANC and we need to enhance our integrity.

“The Northern Cape unconditionally supports step-aside and what we called for was better and consistent application. Even all our delegates from the province advanced the position that we needed to support it,” he said.

Former security minister David Mahlobo has warned more riots could be on the cards for SA.
News
2 weeks ago

Mabuyane said there was nothing wrong with the step-aside resolution.

“The ANC is bigger than all of us and we’re here to save it from us as members and leaders from the public.”

A week ago, KwaZulu-Natal kicked off the debate around the scrapping of the step-aside rule when provincial secretary Bheki Mtolo announced the province would be pushing for it to be scrapped.

On Sunday, Mtolo said KZN was merely supporting the position of Limpopo and Gauteng.

“People forget there were provinces who said this before us. We were supporting Gauteng,” he said.

“Even there, step-aside affects ANC members and has nothing to do with South Africans.”

Meanwhile, a policy proposal for ANC members over the age of 65 years old not to avail themselves for positions was also put to the conference.

The proposal was put by Congress of South African Students national spokesperson Douglas Ngobeni on Saturday.

Members of the ANC are alleged to have chuckled at Ngobeni’s recommendation while those in the ANC Youth League are said to have applauded it.

ANC Youth League convener Nonceba Mhlauli said their position was for what happened in the private sector in terms of retirement age to be reciprocated in the public sector.

“We’re not saying people shouldn’t be members of the ANC, we are just saying they shouldn’t be available to be deployed into government and other avenues of public representation.

“The older people were not too impressed because they think we want to kick them out. We’ll definitely advocate for that going to national conference. I think maybe we didn’t do enough lobbying for our view because it’s the view of the youth league and I think we’ll try and get the women’s league.”

Meanwhile, Ngobeni said the country was growing younger, adding it should be reflected in the ruling party and government.

“It’s important the very same age limit to all public servants should be equal to that of politicians.”

“You can’t blame them because they’re old and tired and we believe it’s something that needs to be changed.

“When you present a policy like that it’s going to be met with maximum unity by people who by the way even differ with factional preferences within the movement because they believe the ANC should be their retirement home.”