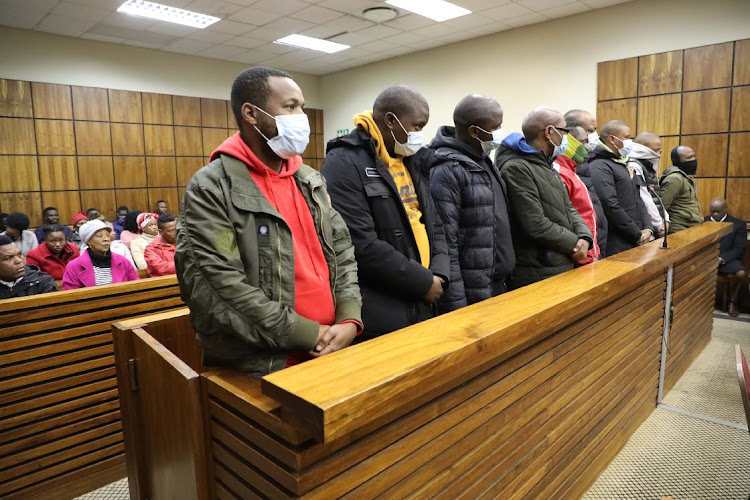 A group of men employed by different police units appeared at the Randburg Magistrate’s Court on Monday. The policemen are accused of extortion, robbery, kidnapping and assault after they allegedly drove into the home of a Joburg businessman and demanded R300 000.
Image: Antonio Muchave

A group of 10 policemen and metro police accused of extortion, robbery, kidnapping and assaulting a Joburg businessman briefly appeared at the Randburg magistrate's court on Monday.

The accused allegedly drove into the home of a Johannesburg businessman in marked Gauteng traffic police (GTP) vehicles and demanded R300,000 from Sipho Phangwa to make a criminal case against him go away.

The arrested group includes two civilians and policemen who are part of different police units from the GTP, Johannesburg Metropolitan Police Department (JMPD), the SAPS and crime intelligence officers.

Four of the accused were arrested last week and six others handed themselves in to the police after they were informed that a case has been opened against them.

The accused were expected to submit a formal bail application but the matter could not proceed as the state informed the court that the complainant, Phangwa, has received death threats.

The investigating officer handling the case is understood to be tracing the owner of the cellphone number allegedly used to threaten Phangwa.

“I have been receiving threats since I’ve reported my robbery incident to the police. I fear for my life and those around me but I will not back down until justice is served on this case,” said Phangwa.

The 10 accused did their best to hide their identity in court. The men wore facemasks as they walked into court. They kept their eyes fixed on the ground during court proceedings.

It was only when they were ushered back to the holding cells that some of the accused waved to their family members and colleagues seated in the packed court gallery.

The accused will reappear at the same court on Tuesday for a formal bail application.

Meanwhile the JMPD and GTP are conducting internal investigations against their members implicated in the Phangwa matter.

Businessman assaulted at his home and robbed by group police officers

A Johannesburg entrepreneur claims he was kidnapped by a group of police officers who drove blue light vehicles into his house Bryanston and demanded ...
News
1 month ago
Next Article