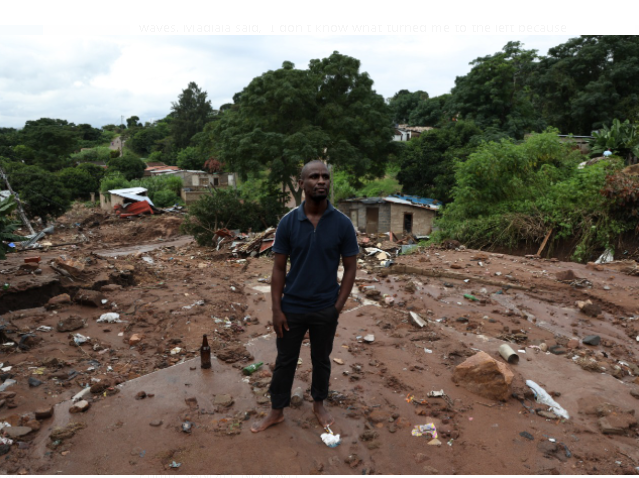 Lizwi Madlala,30, stands on the foundation where his house used to be at Kwa-Santi in Pinetown.
Image: SANDILE NDLOVU

A KwaZulu-Natal man still cannot believe he survived the recent floods after his neighbour's house collapsed on him while he was sleeping.

Lizwi Madlala, 30, was asleep in his bed at home in Kwa-Santi, Pinetown, on Monday when he heard a big blast as his house flooded.

“I don't know how I survived. Most people died, including my neighbours, but I am still asking myself how I survived”, said Madlala.

He only remembers his bed floating backwards and veering left towards another house before coming to a halt. He sustained minor scratches from pushing away rocks being carried by big waves of water.

Lizwi Madlala,30, was consciously asleep at home on Monday when he heard a big blast as his house flooded. Video: SANDILE NDLOVU @TimesLIVE pic.twitter.com/g4pgkOU4Bw

Madlala said: “I don't know what turned me to the left because everything was going to the right, including my neighbour who is still missing. God's hand just turned me.”

Madlala is one of the victims of the floods who survived. At least 398 people died while about 27 are still missing.

The search for the missing continues.

A policewoman, as well as a police dog who had tried to save her, died on Sunday during a flood search and rescue operation.
News
4 months ago

Charity groups are rallying together to assist victims of the recent KwaZulu-Natal floods with vital provisions, including mattresses and potable ...
News
4 months ago

More than 13,500 households have been seriously affected by the KwaZulu-Natal floods, human settlements minister Mmamoloko Kubayi said on Saturday.
News
4 months ago
Next Article