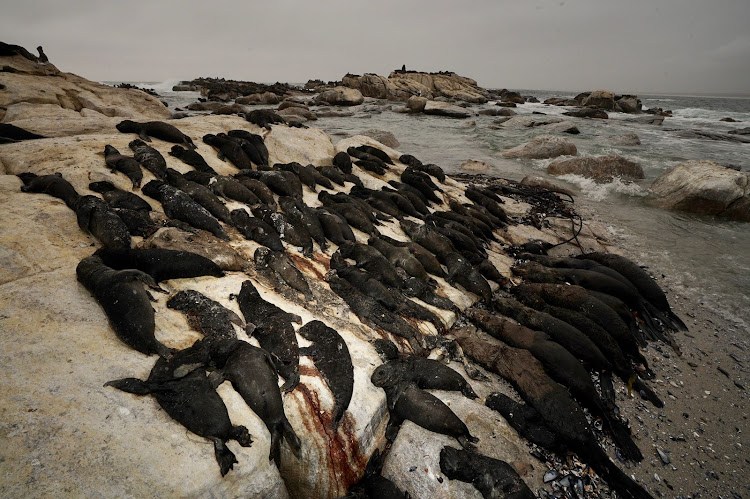 Researchers collected these dead seals in one small area of Lamberts Bay in 2021.
Image: Supplied

The hundreds of Cape fur seal pups and sub-adults that died in the Western Cape in September 2021 succumbed to a variety of factors, including malnutrition, and not biotoxins as was previously suspected.

These were the findings presented to the department of forestry, fisheries and environment which, along with the SPCA, had requested the provincial department of agriculture’s state veterinary laboratory to investigate the mortalities and look into the mass deaths in the Elands Bay area of the West Coast. Municipalities recovered or buried more than 1,600 dead seals between September and November.

Post-mortem examinations “found evidence of moderate to severe malnutrition, which led to the poor body condition of the mammals”, the department said.

“Clinical signs, including convulsions seen in the video footage received, suggest possible biotoxin poisoning. As a result, extensive testing for significant parasites and viruses, including distemper and bacterial infections, were conducted on all carcasses. The results have proven either negative or insignificant. All results for biotoxins were negative..

“Because of the neurological signs witnessed, similar tests will be conducted on adult carcasses as part of a more thorough, well-rounded investigation by the state vet.”

Explaining why so many seals washed up in the Berg River, Cape Town, Elands Bay, Lamberts Bay and Saldanha Bay areas, the department said this was because the die-off coincided with the time seals prepare for their breeding season and colonies see an influx of mature individuals.

“Adverse weather, such as strong winds and storms in September and October had previously resulted in large numbers of pups washing up dead or emaciated on beaches adjacent to breeding colonies.”

National, provincial and local government, working with agencies and partners, continue to monitor the situation with carcasses found taken to the state veterinary laboratory for tests.

Members of the public were urged not to handle underweight, injured or non-responsive seals, but rather to report these to the SPCA.

“Seals can be dangerous and can cause severe damage when they bite or attack to protect themselves. Attempting to rehabilitate a seal on private property may lead to a fine or imprisonment. Seals are protected in terms of the NEMBA: Threatened or Protected Marine Species Regulations.”

Government is yet to determine the cause of the widespread seal die-off that extends from at least Lambert's Bay on the West Coast to Hermanus in the ...
News
7 months ago
Next Article