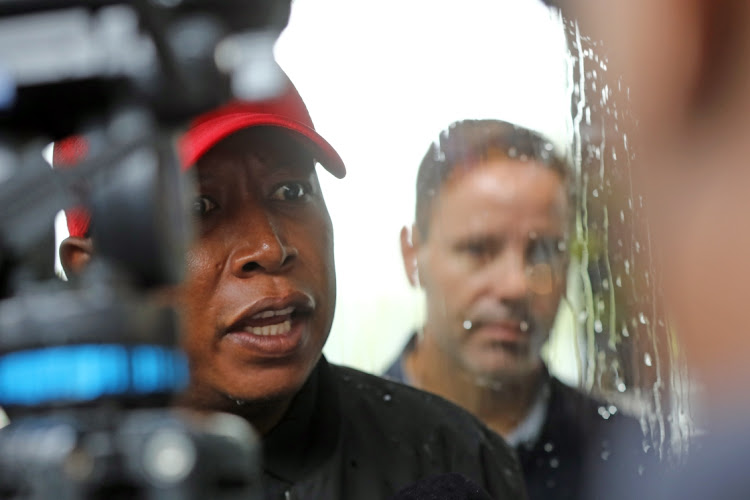 January 19 2022. Romon De Comarmond Manager of kream Restaurant refused to talk to EFF leader Julius Malema is seen looking at Malema through a glass door. Malemavisited the restaurant to check if the retio between South Africans and foreign nationals is balanced.
Image: Thapelo Morebudi

EFF leader Julius Malema has warned that his party would put pressure on all restaurants that employ foreign nationals at the expense of South Africans as this would cause conflict and result in exploitation.

Malema was on Wednesday at the Mall of Africa in Midrand, Johannesburg, where he and other party leaders conducted inspections in several restaurants as part of the EFF’s campaign of ensuring that the employment ratio in the hospitality sector had a preference of locals.

The EFF has accused the hospitality sector of hiring illegal foreign nationals in a bid to exploit them as they could not make demands in relation to being paid a minimum wage and other benefits that South Africans enjoyed in terms of the law.

“They must comply. We have a problem of high unemployment and poverty and it can only be resolved through employment. No-one is saying they must not employ Zimbabweans but there must be at all times  locals who are given preference,” Malema said.

One of former Kream restaurant workers say the restaurant has been exploiting workers irrespective of nationality and that the #MalemaRestaurantVisit by the EFF is welcome as it may help in getting some of the issues addressed. @SowetanLIVE pic.twitter.com/avyeKQETdO

Several EFF supporters in the party's regalia braved the drizzle as they danced and chanted outside the visited establishment.

Malema’s inspection drive however got off on a rocky start after he and his entourage were blocked by the management of Kream, resulting in its temporary closure as well as that of other restaurants after the party pushing through.

Management at Kream restaurant earlier tried avoiding speaking with the #EFF delegation led by @Julius_S_Malema but it & the nearby have now been temporarily closed as the party visits them to assess the employment ratio between South Africans & foreign nationals. @SowetanLIVE pic.twitter.com/GwVboPkQLE

“They apologised for their misbehaviour and blamed it on their legal department and that someone gave them a letter not to engage with us,” Malema said.

Thando Puti, who hails from Zimbabwe, said the increase in scrutiny by political parties into the exploitation in the hospitality sector was important as many of the workers remained voiceless and disposable despite the unions that operated in the sector.

The DA has criticised EFF visits to restaurants to check the employment ratio of foreign nationals against locals, saying it is "workplace terrorism" ...
News
6 months ago

The EFF said if the picket does not yield the desired results, the party will protest at the offices of the SA Football Association and the Premier ...
Sport
6 months ago
Next Article