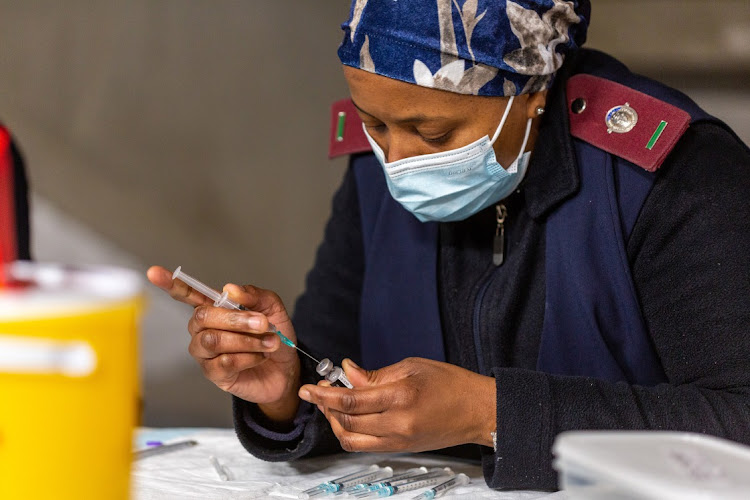 Almost two-thirds of healthcare workers in one of the world’s biggest Covid-19 vaccine trials have not yet taken booster shots, and they only have 10 working days left to do so.

They will be at the forefront of SA’s fourth wave of infections, as the highly transmissible Omicron variant drives up SA’s caseload.

When the first phase of the Sisonke trial ended in May, almost 500,000 of SA’s healthcare workers had received a single dose of the Johnson & Johnson (J&J) vaccine. This was identified as key in limiting illness among workers on the frontline of the country’s subsequent waves of Covid-19 infections.

But uptake among the same cohort has lagged in rural provinces, especially since the trial’s booster phase began in early November. By Saturday, only 183,539 of the 496,424 original participants had come forward. Most participants — including those exposed to the most severe cases of Covid-19 through their work — have abstained from the free intervention to enhance their immunity.

The highest tally of those who have taken the shots was in Gauteng — Tshwane is the hotbed of Omicron infections — followed by the Western Cape.

Uptake has been poorest in SA’s rural provinces, which has those monitoring the study worried. Glenda Gray, president of the SA Medical Research Council (SAMRC), urged hospital CEOs and provincial health MECs in seven of SA’s nine provinces to ensure that those involved in the implementation study take boosters.

“We see that the boosting strategy is lagging in the rural provinces. If you’re in the Western Cape, or you’re in Gauteng, healthcare workers are getting their boosters. And if you look at the other provinces, they’re lagging,” says Gray.

It is expected the second phase of the trial will offer “critical data” on the interaction between Omicron and those with and without a J&J booster shot.

“We’re watching them for breakthrough infections, hospitalisations and deaths,” she said.

It is possible the second leg of the trial, set to end on December 17, will be extended if booster shot uptake is inadequate.

The deputy director-general of the health department, Nicholas Crisp, said some of the trial’s participants wanted to keep their options open. “They’re holding out for something different in future,” he said.

According to Crisp, SAMRC research on the trial’s latest phase would inform the government’s stance on booster shots. “We will consider from those results whether to roll out into other parts of the population,” he said.

Crisp said while preliminary evidence was “quite convincing” that booster shots offered some immunity, the data was not convincing that the difference was overwhelming.

“One has to be very careful of interpreting too quickly. That’s why we’re waiting,” he said.

Whereas the government was waiting for more information before making a call on booster shots, Crisp said vaccination for everyone — including those as young as 12, people older than 60 not yet immunised and pregnant women — was essential.

“Up to now, with all the variants we have seen, they protect against mild infections to a small, reasonable extent but they protect very strongly against severe infections.”

Richard Lessells from the KwaZulu-Natal Research Innovation and Sequencing Platform (Krisp) said he was concerned that anecdotal reports from those with Omicron having mild symptoms, particularly among younger patients, were creating a misperception.

“The worry is because it’s spreading so efficiently through the population, it will still find the people who are vulnerable,” Lessells said.

Crisp advised against large social gatherings during the holiday season.

President Cyril Ramaphosa’s weeklong diplomatic trip to Nigeria, Ivory Coast, Ghana and Senegal ends on Tuesday, and he will convene an urgent meeting of the national command council on coronavirus on Wednesday.

Officials are believed to be averse to a significant tightening of Covid-19 restrictions.

Rules for events, venues and tourist sites amid Covid-19 gazetted

The tourism ministry has published new rules for safe operations in the tourism sector amid the Covid-19 pandemic.
News
5 months ago

Number of children with Covid-19 is not cause for panic, says expert

Higher hospital admissions among children during a fourth wave of Covid-19 infections in South Africa that is driven by the Omicron variant should ...
News
5 months ago
Next Article